“No more evictions. We want our land”

Continued resitance, despite the overwhelming odds

by Jan Rocha, for LAB

Three young Kaiowá-Guarani Indians travelled hundreds of miles to São Paulo last week to plea for justice. “We want to live,” they said. “What is happening to us is genocide.”

Genocide is a word being used more and more to refer to the situation of the Kaiowá, a subdivision of the Guarani, who live in the state of Mato Grosso do Sul. Over the last eight years, 250 Indians, nearly all of them Kaiowá, have been killed in this state alone, compared with 202 Indians in the rest of Brazil for the same period.

Between 2003 and 2010, 176 Kaiowá committed suicide, against 30 Indians in the rest of the country. Their infant mortality is 38 per 1,000, while the Brazilian average is 25. Hunger is common, with 80% of the population depending on government food handouts. As a result, the life expectancy of a Kaiowá-Guarani is 45 years, compared with the Brazilian average of 73 years; that is the same as the average life expectancy of an Afghan and 14 years less than that of an Iraki, despite their wars.

The key to the tragedy is land. 45,000 Guarani, the biggest indigenous group in Brazil, are confined in a number of small demarcated areas, totalling 42,000 hectares. In the same state, the 3,000 Kadiweu Indians occupy 538,000 hectares.

The once proud and independent Guarani, who before the arrival of the Europeans occupied vast areas of southern Brazil, Paraguay and the north of Argentina, now live squeezed into squalid rural slums, tattered tents at the side of roads, miserable villages surrounded by monotonous fields of soya or sugarcane, their air and rivers polluted.

Although it has the second largest Indian population of any state (after Amazonas), Mato Grosso do Sul has fewer demarcated 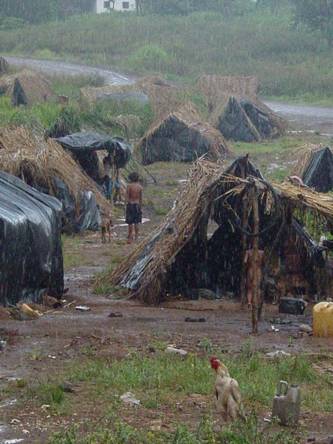 Road side camp indigenous territories than any other state. This is because of the strength of the politically powerful anti-indigenous lobby, which has managed to delay or prevent the creation of territories.

The roots of the conflict between Indians and farmers in this state go back a long way. Much of the land was distributed free to farmers, first after the war with Paraguay in the 1860s, and then in the 1930s during the Getúlio Vargas government. It was a way of settling a frontier region seen as empty – although it was, in fact, inhabited by a large indigenous population.

The conflict has worsened in recent years, as booming commodity prices have increased the demand for land to produce beef, soya, sugar and, more recently, sugarcane for ethanol.

Egon Heck, the local coordinator of Cimi (the Catholic Missionary Council), who has worked with indigenous groups for 40 years, says that since 2008 the state government itself has been funding an anti-indigenous campaign, based on scare tactics. The government frightens people, he says, by claiming that the Indians are demanding 12 million hectares of the most fertile lands and that the state will become unviable, if all these claims are honoured. People are reported to be buying arms because the farmers’ union is saying the Indians will invade properties all over the state.

The Guarani have responded to the litany of broken promises, deceptions and delays by organising retomadas, the re-taking of their ancestral lands now occupied by farms. They usually fail and, when they are evicted, they set up camps on the other side of the ranch fences, even though this leaves them vulnerable to retaliatory violence. There are now 30 such camps in the state.

This climate of confrontation and violence has been worsened by the extreme slowness of the demarcation process conducted by Funai, the government’s Indian agency, and, when they are involved, the courts. Indeed, neither the Guarani nor the landowners have any trust in the legal system. For landowners, this means taking the law into their own hands and using armed militias and gunmen to stamp out the retomadas. 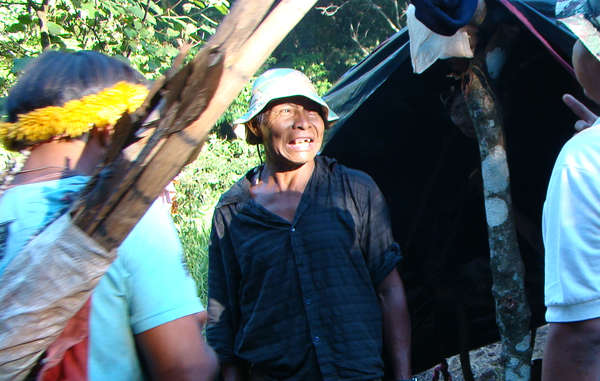 Nisio GomesThe latest example of this violence was in November when an armed, hooded gang attacked a group of Guarani camped at the side of the road, beside the farm which they say is their ancestral land and they had tried to reclaim through a retomada. Survivors of the attack say two adolescents were kidnapped, and their cacique, Nisio Gomes, was shot dead and his body carried away by the gunmen. The disappearance of bodies, which prevents the Indians from carrying out their funeral ceremonies, which are an important part of their culture, is a new practice.

For Egon Heck, only the federal government can stop the genocide and get the law respected in a situation where violence and wealth now call the tune. The chance to return to their ancestral land would not only mean justice for the Kaiowá-Guarani, but would also help restore Mato Grosso do Sul’s much decimated forests, reduced in some areas to less than ten percent of their original size.

The slow genocide of the Guarani would be a dreadful stain on the record of any government. For the Partido dos Trabalhadores (PT) government, which has been in power for nine years and has repeatedly proclaimed its commitment to human rights, it is even more shameful.

Egon Heck says the Guarani have only been able to resist 500 years of violence because they have developed survival strategies based on age-old wisdom, sustained by their strong relationship with the supernatural and the earth, their earth.

So, even in the face of overwhelming violence, they somehow continue to resist and to carry on with their attempts to reclaim their land. But for how long?