by Jan Rocha in Sao Paulo 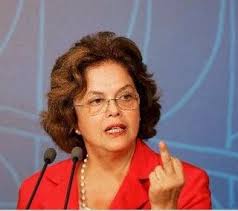 Just a few days to go before election day, Oct 3rd, and things are hotting up. The latest polls show Dilma Rousseff, the PT candidate (pictured), dropping a few points, chief opposition candidate Jose Serra still 20 points behind, but the Green Party’s Marina Silva on an upward surge. The mainstream press, which make no secret of their preference for Serra, are enthusiastically predicting a second round, because Dilma won’t get the necessary 50.1% in the first round.

Dilma’s dip seems to have been caused by a wave of government corruption scandals involving Dilma’s successor in the Casa Civil in nepotism and traffic of influence, and a heated exchange between President Lula and the press. While Lula accused the mainstream media of being, in effect, ‘a political party’ because of its lack of impartiality in coverage of the election campaign, the media accused Lula of attacking press freedom and, by extension, democracy. A debate on this alleged threat to freedom was held at the Military Club in Rio, home to the retired generals who ran Brazil as a rightwing dictatorship for 21 years, stamping out democracy and censoring the press. But this irony seems to have escaped Serra’s supporters, especially those in the so called Democratas party, who are desperate to brand Lula as a Brazilian version of Chavez or Fidel. Dilma, for them, is not an ex-guerrilla who fought against a dictatorship, but an ex-terrorist.

In fact, Serra’s campaign has been getting more and more desperate, and his promises wilder and wilder: if he were elected and he kept them all, he would bankrupt Brazil. Among these promises, at a time when inflation is around 4%, are a 20% increase in the minimum wage, a 10% increase for all pensioners, and an extra monthly payment for the 13 million recipients of Bolsa Familia. Serra has also promised to extend the underground system by  400 km in major cities, although the average during the 16 years his party has governed Sao Paulo has been only 2 – 3 km a year. When a few days ago the overcrowded SP metro broke down, leaving hundreds of thousands of passengers trapped, breaking windows to get out in their panic, he hinted at ‘election sabotage’ without a whiff of proof.

But the barrage of anti-Dilma news, accusations and alleged scandals in the mainstream press has affected her vote among the middle classes. These votes have migrated to Marina Silva (pictured), though, not to Jose Serra. And Dilma’s core vote, which is among the lower income classes who have benefitted most from the Lula government’s social and economic policies, remains solid and largely unaffected by scandals. Political analyst André Singer sees a re-alignment of the PT vote. When the party began, its supporters were mostly the unionised, organised workers of the factories in the industrial suburbs of Sao Paulo and the intellectual middle class. The mass of very poor voted for populist candidates, for local caudilhos. Now you could say that the PT has become a true Workers Party, because it has the vote of the vast mass of the lower income groups — the rural labourers, domestic servants, unorganised workers in small factories, for whom the Lula government has delivered.

Marina has picked up votes from those disillusioned with the PT, with the betrayal of what they believe the party stood for, with its pragmatic alliances with corrupt politicians in some of the more backward states. In both Amapá and Tocantins the governors, running for re-election as allies of Lula’s, are accused of massive scandals involving public money. In Tocantins, to make matters worse, a local prosecutor then banned the press, both national and local from mentioning the governor’s alleged involvement. Armed soldiers were sent to the airport to stop the papers from Rio and Sao Paulo being unloaded. This ban was only overturned when it was realised the disastrous effect on public opinion. Which shows, of course, that when a tinpot official tries to stifle press freedom, there is a healthy reaction.

By itself the shift of votes to Marina would not be enough to guarantee a second round. But what worries the PT now is the possible effect of a change in voting rules. Previously, an elector had to produce either his voter’s ‘title’ or document, or another piece of identification, in order to vote. This time he or she must produce both and the PT fear that many people, especially in the Lula heartlands, don’t know this, and therefore won’t be able to vote. So the PT has applied to the Supreme Court for an injunction, suspending the new rule. And because they obviously hope that many Dilma votes will be lost this way, the Democratas have applied for a counter injunction to maintain the rule.

The long drawn-out campaign has seen many TV debates between the candidates, but the elaborate rules designed to avoid the shouting matches of yesteryear politics have produced instead anodyne monologues, lists of promises, rather than concrete programmes and proposals for Brazil’s new role as an important world power. Whoever wins, everyone agrees that Lula will be a hard act to follow.