Latin America BureauNews, analysis and information on Latin America, its people, politics and society.
HomeCountriesBrazilBrazil: the 'Pacification' of Rocinha

Brazil: the ‘Pacification’ of Rocinha

by Jan Rocha for LAB

The ‘pacification’ of Rocinha was conducted as a war operation – 18 large armoured vehicles, 4 helicopters, dogs, horses and over 1000 heavily armed police and marines invaded the narrow streets of Rio’s largest shantytown. In a vain attempt to stop their advance, drug traffickers poured gallons of oil down the steep streets and set up barricades, easily crushed.

But most of the traffickers had already fled, including their boss, Antônio Francisco Lopes, known as Nem, discovered hidden in the boot of a car when some of his henchmen tried to bribe their way out of Rocinha. Two of Nem’s closest aides had already been captured when they were being escorted to safety by a group of rogue police – members of what is called the banda podre da policia (the rotten police).

Within a few hours the real police had seized 300 stolen motorbikes, plus a big haul of powerful rifles, guns, a machine gun, ammunition and grenades, much of it buried in the forest at the top of the hill where the steep streets of Rocinha come to an end. They had used night vision equipment to track criminals going up into the trees.

They also relied heavily on tip offs from Rocinha residents, most of whom seemed happy to be free of over 30 years of domination by different drug overlords. Yet the residents were still cautious. Many stayed at home to protect their belongings from police looting, mindful of what happened during a similar operation in another Rio favela, Complexo de Alemao, a year ago. To avoid temptation, police were forbidden to wear backpacks.

Nobody was killed or injured, and the operation is being hailed as a resounding success.

Rocinha is the 19th Rio favela to be pacified. Another 21 are due for the same treatment. Rio Governor Sérgio Cabral’s policy is to drive 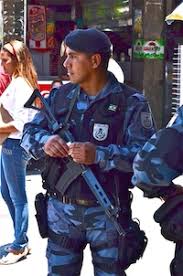 the drug gangs out of the favelas that are located cheek by jowl with some of Rio’s wealthiest neighbourhoods and near World Cup and Olympic venues.

The authorities know perfectly well this is not the end of the gangs. They will relocate to less desirable, more distant areas of the city, where policing is intermittent, like Antares, in the west, where a TV cameraman was shot dead two weeks ago. But the favelas in Rio’s picture postcard areas will be free of them, and that is what matters for the time being.

For the 100,000 inhabitants of Rocinha pacification should mean, apart from regular policing, the introduction of regular services and utilities, like rubbish collections, better drains, water supply and lighting. Research shows that TB cases are five times higher in Rocinha than in the rest of the city, because the narrow, crooked streets do not allow in sunlight and fresh air. A funicular railway will also be built to the top of the steep hillside to which Rocinha clings.

Yet there are risks, largely because the ‘pacification’ was not planned as part of an integrated programme to improve life for the favelados. Anthropologist Alba Zaluar says that, although the Police Pacification Unit (UPP) project is praiseworthy in itself, there is a danger that the Unit commander himself becomes a new chief, replacing the drug boss. What is needed, she says, is the “empowerment of local organisations”.

There is also a well-founded fear that when the drug gangs move out, the militias move in. These illegal organisations, which began as vigilante groups of ex-policemen and firemen, have developed into full-blown protection and criminal rackets and now dominate more favelas than the drug gangs. They make their money from running pirate cable and internet networks, gas, transport and water connections and even some of the new government housing projects. They kill those who do not cooperate.

They are closely connected to the police of the banda podre and some local politicians. Marcelo Freixo, a Rio state deputy who chaired a parliamentary inquiry into them, has had death threats.

In August a Rio judge who defied death threats and ordered the arrest of policemen accused of murder, was shot dead outside her home. Investigations revealed that the commander of the local military police battalion was party to her murder.

What is the solution? For former president Fernando Henrique Cardoso, the answer is to legalize drugs, which would remove the power of the cartels and gangs and drastically reduce corruption. The drug trade, especially cocaine – which was being not only traded, but refined in Rocinha – involves vast amounts of money. According to ‘Nem’, who had wads of euros and reais with him when he was arrested, half of his profits went on bribing policemen.

Another solution, which is hardly ever discussed by the politicians, is to replace the overcrowded, unhealthy, often inaccessible favelas with decent housing supplied with proper services, good schools, health centres, transport. In other words to treat shantytown dwellers as citizens, not abandon them to be captive targets for drug dealers, militias, and crooked police.