Colombia’s left-wing party, the The Democratic Alternative Pole, or the Polo as it is popularly known, suffered a serious setback in Sunday’s municipal and regional elections. It lost control of the emblematic city of Bogotá which it first won eight years ago. Back then the election was such a boost to their morale that they even thought they might derail Uribe’s re-election in 2006. On Sunday, however, it was relegated into seventh place, capturing just 1.44% of the vote, slightly behind the right-wing religious party MIRA and just ahead of the PIN, a party which has been linked to Colombia’s paramilitaries.

Gustavo PetroThe victor in the elections was Gustavo Petro, last year’s presidential candidate for the Polo, who gained 32% of the poll and over 700,000 votes. He split from the Polo earlier this year and set up a new political formation called Progresistas. At the time of the split he claimed there were irreconcilable ideological differences between them. He caused great anger within the ranks of the party when he stated that he was seeking a strategic alliance with the Colombian bourgeoisie and gave guarantees to Uribe that he would not be extradited to the International Criminal Court. He also seemed to promise to the then president that he would not be prosecuted in Colombia, assuring him that “Uribe and Uribismo are under no threat from me”. However, despite the ideological differences, it seems that Petro’s main problem with the Polo was that he was not in command, a trait that has characterised his political career.

He is a charismatic figure and is instantly recognisable on national television, unlike Aurelio Suárez, his contender in the Polo. In his last outing as Senator, Petro obtained one of the highest votes in the entire country across all political parties. He has an immense personal political draw that has served him well. On this occasion, however, his victory is also due to other factors. Samuel Moreno, the mayor of Bogotá, was forced out of office due to corruption scandals involving public contracts for the building of the city’s rapid transport system. Jaime Dussain, the president of the Polo, admitted that the scandals had affected the Polo’s vote and that “perhaps our sluggish and tardy response to the scandals didn’t help”. The Polo had initially been very defensive and took its time in expelling Moreno from the party.

Losing a launching pad for the presidency

The loss is significant. The Mayorship of Bogotá is considered the second most important elected post in the country after the Presidency. As the Polo knows from experience, any party that controls Bogotá has a huge launching pad for presidential elections. Now it will be the Progresistas who will vie for power in 2014. Aurelio Suárez, the defeated candidate, has been scathing in his attacks on Petro, claiming that the Progresistas are a right-wing formation and that its programme is far removed from that of the Polo. Even though there may be some truth in that, the previous two Polo administrations did not stand out as being particularly left-wing in their policies or in their management. Lucho Garzón and Moreno both implemented programmes and policies that were seen as a continuation of the right-wing policies of Enrique Peñalosa and Antanas Mockus, notably the urban rapid transport system known as Transmilenio, which involves transfering public lands to a private company and bankrolling 93% of the investment required. The city also pays for its upkeep, even though as it is a concession the private company should meet those expenses. It was precisely the corruption surrounding this transport system that led to the collapse of the left vote. Garzón, it should be said, backed Peñalosa this time round, indicating that there never has been a fundamental political divergence between the two.

However, the average citizen is unlikely to notice much difference between the old administration and the new one. The Polo wasted eight years in office and operated pretty much the same way as other parties, giving jobs to the boys and girls. Whilst it is normal in many countries for certain high ranking posts go to political nominees, in municipal governments in Colombia even the receptionist in City Hall may be a political appointee. This has led to a low rate of unionisation of the workforce, lower even than in the central government. The Polo were happy 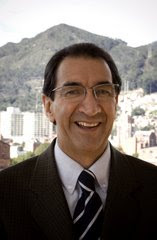 Aurelio Suárez to play the game and corruption was endemic.

The loss of Bogotá and setbacks in other regions will almost certainly complicate the political scene for the next presidential electionsand has opened up new tensions in the Polo, with Congressman Ivan Cepeda calling on Jaime Dussain to resign and pave the way for a renovation of the party. However, this is unlikely to happen. Dussain’s reaction has been to put a spin on the defeat: “The country was defeated as people continued to vote for right-wing parties, except in Bogotá, where we lost out to another centre-left formation, the Progresistas.” He stated that he had no intention of resigning.

Part of the real tragedy of this defeat is that the left candidate, Aurelio Suárez, was probably the best candidate that the Polo ever had, with a consistent and coherent record and not the slightest whiff of corruption in his political career. Paradoxically, he is paying the price for the policies of the right-wing elements in the Polo, including those that were espoused by the victor Gustavo Petro. Unless the Polo is capable of making a clear break with those elements and reestablishing itself as a party that is not willing to play the game of corruption, cronyism and nepotism, it is not likely to recover in the short term. This means paying heed to Cepeda’s call to renovate the party and not to make concessions to the right for the sake of unity or a presumed electoral gain.