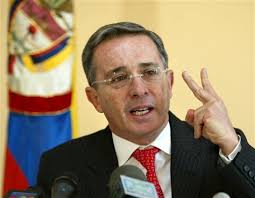 The former president of Colombia, Alvaro Uribe, has taken over from the equally insufferable José María Aznar, as the speaking guest of choice for the high masses of the right’s events in Chile. This year alone, he pontificated at the anniversary of a think tank, a defence seminar and the annual gathering of a leading brokerage firm. He also does this in other countries in the region, but nowhere is he more popular than in Chile.

To tell the truth, I tried to warn those involved in inviting him, as well as the columnists fawning over his “record” but, if they do not even recognise me as the only analyst who predicted the student revolt ten years in advance, the chances that my revelations on the real Uribe and his handling of Colombia getting any mileage, would be somewhat thin. Never mind that protests from other prestigious academics in both countries, together with several Eurodeputies, forced him to abandon teaching posts at France’s Ecole Nationale d’Ingénieurs de Metz (ENIM) and Georgetown Universiy in the USA . Uribe is always welcome in the upper circles of Chile.

For readers who like the truth rather than propaganda, and indebted to insiders in Colombia who are neither Bolsheviks nor involved in any way in local politics, here is an attempt to set the record straight and look at  improvements that his successor Juan Manuel Santos is trying to introduce.

THE CURRENT SECURITY SITUATION IN COLOMBIA

Uribe came in after his first election with the promise to do away with the FARC “in 6 months”.

Nine years on, the FARC is still very much alive. Their “elimination”

claims were due to “false positive” reports of deaths, most of which were

innocent civilians, and their “return to civilian life” was stage-managed

in front of the media that they were leaving the group. Official figures show that the FARC

is a major presence in 339 out of the country’s 1099 municipalities. Often, the local inhabitants

The levels of violence have been climbing up again for several years, and

in 2010 were getting dangerously close to the 2002 peak. Though it is true

that the roads are safer to travel on, it is still very risky to go inland

away from the main highways. The number of persons displaced due to the

violence (nearly 2.5 million) is only beaten by Sudan.

The fight against the drugs trade, which together with terrorism , was the

main aim of the US-financed Plan Colombia, has been unsuccessful, putting

it mildly. The production of cocaine is up, despite public claims to the

contrary, and the country now produces more heroin than Afghanistan.

Colombia did not even get a present from the USA, despite being their closest (cynics

would say, only) friend in the region. After three years, Congress in

Washington has yet to approve a bilateral Free Trade Agreement, even

matter forward. Many in the USA also rightly regard Plan Colombia as

having been a waste of money.

What can you expect from a man who last February

holidayed, at the invitation of a Venezuelan magnate, in the Dominican

Republic in company of both Senior and Junior Bushes, and José María

Aznar? It reminds one of the mafia leaders’ get-togethers in gangster films.

The corruption is all pervasive in and anound Uribe. No less than the

financed Uribe’s first election in 2002, and there was also a lot of

illegal financing of the 2006 campaign. His two sons, Tomás and Jeronimo,

have shamelessly benefitted from their father’s job to line their

pockets. His cousin was jailed for corruption, as was his fomer

agriculture minister , convicted of grabbing land from small farmers and

giving it to big landowners.

The biggest scandal was with the security services DAS, accused (including

by the Washington Post, hardly a Communist mouthpiece) of using

US-delivered equipment to spy on local political opponents rather than

violent groups and drug dealers as intended. Both the former head of the DAS and

Uribe’s own chief of staff have been arrested. The anti-drug agency, DNE,

was not left behind, passing assets grabbed from arrested drug traffickers

The Uribe administration was also very generous with foreign mining

companies, allowing them concessions and tax breaks even though their

activities, located near sources of water, are highly contaminating.

Meanwhile, illegal groups have been diversifying, in parallel with the drugs

trade, into illegal gold mining, encouraged by the rising price of the

Finally, Uribe really showed where he stood morally by getting close to

Israel to the extent that even his US friends were worried. Not only did

fighters, and acquired drones from the same country, but he initiated an

intelligence-sharing programme with Mossad. This did not stop the United

Israeli attack on the humanitarian flotilla heading for Gaza.

It is only a matter of time, as I warned the autistic Chilean hosts and

other local opinion leaders, all of whom ignored me royally, that Uribe

place from where he cannot be extradited. They will all look pretty silly,

but then they are that most of the time anyway. No fewer than 29 NGOs have

asked the International Criminal Court to investigate him. His words at a

recent talk he gave in El Salvador, where he recommended that one “should

not negotiate with organized crime but bring them to justice”, may soon

He may be popular in Vitacura and Lo Barnechea, but in Colombia itself,

with the October local elections approaching, all candidates sponsored by

him are suffering from the “kiss of death” syndrome, trailing behind their

competitors, even in Uribe’s own fiefdom of Antioquia. As one source in

Colombia put it to me, Uribe is “An admirable bullshitter

in a country perenially waiting for a Messiah”. In this case, it looks as

if they got the Antechrist.

his successor would give continuity to his policies and safety for himself,

he was soon disappointed. Juan Manuel Santos turned out to be very much

his own man and, besides taking his distances from Uribe, he has given a

free hand to those going after him.

Let us read the words of Uribe himself on the subject in a June interview:

anti-corruption policy forward.” According to Uribe, Santos is performing

aesthetic changes to corrupt entities without really fighting the

hands of wealthy families] and have just changed the name,” said Uribe.

“They’re simply discrediting a government that worked with patriotism. As

Colombians in the streets and on public squares.”

better manners”, and it should not be forgotten that he was no less than

the minister of defence when excesses were committed by the armed forces.

Nevertheless, it is style and appearance which is paramount in this part of the world

so he should not be dismissed outright; he also deserves to be given the

His approach so far has been businesslike and fence-mending. On foreign

policy, he seems to have ended the ongoing confrontation with Chávez in

Venezuela. At home, he announced indemnities for the victims of violence,

to be settled over a 10-year period, and described the extreme right as a

“black hand”. He has changed the definition of the fight against violent

groups (the FARC and the ELN) from “anti-terrorist” to “armed conflict”.

To show he means business, he recently fired the incumbent defence

minister and replaced him with a close associate, Juan Carlos Pinzon.

was serving as the presidential chief of staff. There are expectations of

possible changes in the armed forces’ high command in the near future.

Pinzon’s predecessor was sent to a safe distance as ambassdaor to the EU.

Illustrating the importance of “image” , Santos also renamed the security

If there were any doubts about his original initiative, he has asked the

notorious Spanish magistrate Garzon (the one who got Pinochet) to advise

It is not an easy task. There are a lot of vested interests and people who

will not like their toes to be stepped on. There are mercenary journalists

still defending Uribe at home, and he is also interviewed by compliant

internatonal media, some of whom have been found to be showing their columns

to paramilitary leaders for “vetting”. Also, more changes are needed in

legislation and practice. A legal reform stipulates that all cases against

in person. Believe it or not, there are as many as 1,150 such cases in

progress, but the chief prosecutor admitted that with luck, she could only

deal with three a year !

In the midst of all this, how is Colombia´s economy doing? One has to say

in the past three decades, the country has shown a resilience above most.

service at the middle level, whereas other countries think that declaring the Central Bank

“independent” by decree, and then fighting like “chiffonniers” between

country I am thinking about), is a real separation of duties.

One curious aspect of Colombia’s macroeconomics is that statistics are

very slow to come out. We only have GDP for the first quarter, which grew

by 5.1%, whereas expectations for the full year are currently for around

4 to 4.5%, not outstanding but honourable. Inflation is running at under

and close to a 10-year minimum.

considered healthy as is the external sector. There are detailed trade figures only

and imports 41.3% higher. One important aspect is the sharp increase in

oil production and exports, which has transformed Colombia into a middle

barrels per day, and the government has announced US$1.5 bn of investment

in the sector over the next five years. There are still problems of security

at oil fields. Though the country still imports some US$2 bn of oil

products, the balance of oil and fuels trade is largely positive.

Oil is now by far the country’s largest export, accounting for 49% of the

total so far this year, followed by coal (14%) . Coffee, which was once

it represented half of total sales abroad.

Remittances from Colombians abroad are stll going strong, totalling US$2

bn in the first semester. External reserves were US$31.75 bn as of end

bn contingent credit at the IMF. The authorities are confident they can

Problems there are aplenty, notwithstanding that the country came second

for example (Santos called the current cost of pension “unsustainable”). A