Women are being killed in Honduras at a rate of almost one a day and gender-based violence has now become the second highest cause of death for women of reproductive age. In this small Central American country of just under eight million, more than 2,000 women have been killed in the past five years.

According to a report launched last year by Oxfam Honduras and a Honduran NGO, the Tribunal of Women Against Femicide, reported by LAB, women are dying because of a deadly mixture of gun crime, domestic violence and the “systematic indifference” of the police. Convictions for these crimes are rare – between 2008 and 2010, there were 1,110 reported cases of femicide, yet only 211 made it to court. Only 4.2% of these cases resulted in a conviction. 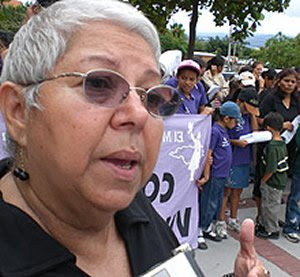 Gladys LanzaOne of the women at the forefront of the struggle to stem the violence against women is Gladys Lanza from the Movimiento de Mujeres por la Paz ‘Visitación Padilla’. LAB interviewed her in Tegucigalpa on a crackly Skype line, which was constantly being cut off.

LAB: What precisely does your organisation do?