The battle for control in Rio

It began with cars, vans and buses being stopped at random, their passengers ordered out, and the vehicles set alight. This happened all over Rio in both smart and poor neighbourhoods for several days at the end of November. By the time the police got to the scene, all they found was just a blazing wreck. When they did catch some of the arsonists, they were invariably adolescents with plastic bottles full of petrol. Altogether over 100 vehicles were set alight.

The authorities said the order to burn was coming from inside a maximum security prison in Paraná where members of the Red Command criminal gang were incarcerated. And the motive was said to be the successful introduction of UPPs, or Police Pacification Units, into several Rio favelas. These community police bases have successfully pushed out the drug gangs who were previously in control. Hence the revenge tactics.

But by choosing targets “no asfalto”, that is in the city, not in the favelas, the Red Command made a huge tactical mistake. With the World Cup and Olympic games due to take place in Rio in 2014 and 2016, the authorities could not afford this sort of bad publicity and the inevitable articles in the international press questioning the country’s competence for holding the Cup or the Olympics. 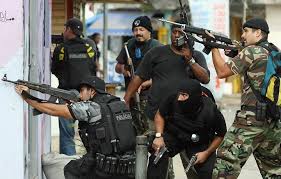 So they launched a full-scale military operation to clear the Red Command drug gangsters out of their headquarters in the Complexo do Alemao, a rabbit warren of slums where 400,000 people live. While the entire area was surrounded by troops, tanks, troop carriers and armoured cars invaded the narrow streets followed by hundreds of heavily armed policemen.

When they got to the highest point of the favela, they raised the Brazilian flag. They were literally recovering a piece of territory that had given over to a criminal organisation for years. Successive Rio governments had simply washed their hands of the problem, allowing hundreds of thousands of citizens to live in a no-go area where public services and the rule of law simply did not exist.

The police found a huge haul of drugs abandoned by the traffickers – over 300 tons of marihuana and cocaine, and over a hundred heavy arms, including machine guns, a bazooka, grenades and mortars. They also found hundreds of stolen motorbikes and cars. But they failed to capture most of the top gang leaders, who escaped.

How they did this is a mystery – some rumours had them disguising themselves as priests, others said they put on the uniforms of council workers on a nearby government drainage project. Or did they crawl through the sewers themselves? There were also stories that they had paid out hefty bribes to policemen in order to escape.

At first, the police were greeted as heroes, but they soon turned into villains, as more and more people came forward with stories of looting and violence when their homes were searched. The police chief even felt obliged to ban his men from wearing backpacks when they went into the favela, in case they were using them to carry out stolen goods.

But the residents were happy with the restoration of normal citizens’ rights – having the rubbish collected, being able to get their documents sorted out, having a place for children to play without fearing stray bullets from shoot-outs. Some children have even been playing in the abandoned hilltop swimming pool of a gang leader, surrounded by a wall painted with idyllic Rio scenes like the Sugarloaf Mountain.

Now they have retaken the Complexo do Alemao, the Rio authorities have promised all sorts of services and social equipment for its residents. Next year they will install a UPP.

Public opinion applauded the operation, and the use of the military. Rio’s Public Security Secretary, José Beltrami, has been cheered when he appears in restaurants. What seems to be lacking is any sense of outrage at what the operation revealed about Rio: that certain favelas have been allowed to become no-go areas, controlled by drug gangs, outside the remit of the authorities. Their populations have simply been abandoned, deprived of their rights as citizens, as completely as though they lived in a different country.

The question is: will the need to make Rio safe for the World Cup and the Olympics lead to a serious attempt to banish the drug cartels, to clean up corruption in the police force, and to improve the conditions in the favelas, allowing their populations to become full citizens? Or will the successful military operation be seen as a blueprint so that Rio will in effect be under military occupation during the games?