Last Tuesday [27 September 2011], in the port city of Veracruz, 35 bodies were dumped in public spaces in the heart of the city. The act took place in broad daylight despite an atmosphere of heavy security meant to protect a meeting of the country’s attorneys general. All the bodies had a Z painted on their torsos, and some with the words “por Z” (for being a Z), presumably indicating membership in Mexico’s most brutal and vicious criminal gang, the Zetas. 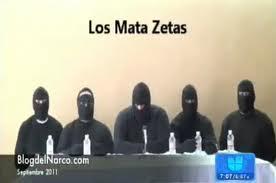 Two days later, the bodies of seven more presumed Zetas were found in similar conditions on well-traveled streets in the city. All bore signs of torture, and most of death by asphyxiation. The killers hung a “narco-banner” on the street, highlighting the impunity with which they acted, and emphasizing the warning contained in the murders. The banner warned Mexico’s most vicious criminal group, the Zetas, that more was to come. It was signed “NG.” It read:

“No more extortion, no more deaths of innocent people. Zetas get out of the state of  Veracruz. Still more to come…. Zetas die like this or like those we’ve shot. To the people of Veracruz, don’t pay any more extortion. If you do it’s because you want to.”

Over the weekend, the NG (more completely, the CJNG, Cartel de Jalisco Nueva Generación) posted a series of videos on YouTube, justifying and taking credit for the killings. What is happening is ominous. The militarization of the drug war is spawning competing armies; the CJNG, the armed wing of a drug-trafficking cartel, is presenting itself as a paramilitary force, fighting alongside “the people.” Over the weekend, it issued a communiqué (translated by borderlandbeat.com) in which it very clearly named its enemies—in and out of government:

“Motivated by our personal experiences, we the members of this force that is the paramilitary arm of the people and for the people state that our only objective is the Zetas cartel, with all due respect to the armed forces that we understand cannot act outside the law, which we encourage.

We do not avoid our responsibilities, but only fighting under equal terms will we succeed in eradicating the Zeta cartel from the roots up. To accomplish this we ask that that the functionaries and authorities who support the Zetas stop doing so.

That the armed forces be confidant that our only objective is to finish off the Zetas and that all of society be confidant that we, the Mata Zetas [Zeta killers], do not extort, do not kidnap, or in any way damage your personal or the national well being.

We respect the federal, state and municipal executive powers in their fight against organized crime, and we understand their position of not negotiating which obligates us to act covertly but always to the benefit of the Mexican nation.

We are anonymous warriors, faceless, but proudly Mexican.”

The federal government of Felipe Calderón has condemned and distanced itself from this paramilitary justice. Governor Javier Duarte of Veracruz, however, has taken a more nuanced approach:

“The killing of 35 people is deplorable, but it’s even more deplorable that the same victims chose to extort, kidnap and kill,” Duarte tweeted.