by  Glenn Shepard and Richard Pace*

In a make-shift editing room in Belém, Brazil, seven aspiring Kayapó filmmakers hunch over laptops viewing footage shot during the prior year. These young men, representing three Mebengokre-Kayapó villages, are part of a Goeldi Museum project funded by Brazil’s National Research Council (CNPq) that is providing indigenous communities with equipment and training in digital film production. After three days of editing, the novice cinematographers are ready to screen their first films.

Some, such as the Woman’s Festival and Belo Monte Dam Protest are examples of what Terence Turner calls “cultural performance,” a staple element in indigenous-made films.[i] Others focus on less usual topics: a professional soccer game in Rio de Janeiro and a local health worker’s explicit presentation on STDs.

The most intriguing work, however, is Miss Kayapó, a forty-minute documentary about a beauty contest held yearly in a Brazilian town near Kayapó territory. 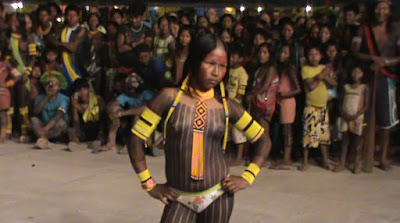 A video still from “Miss Kayapó” 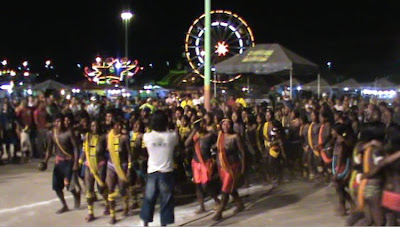 Before the beauty contest, villagers perform a traditional dance on the fairground

The clash of cultural traditions captured in Miss Kayapó raises a troublesome question: is the film self-degrading, subverting native self-understandings and aping Western paradigms in the worst possible way?[ii]

Not if you ask Tatajere and Pymare, the film’s creators: “We are showing Kayapó beauty to all Brazilians.”

When we ask these novice Kayapó film makers if TV and other outside media influence their productions, they claim that watching TV helps them choose and frame better images, but does not exert a more profound influence on their film-making technique: “We are Kayapós, not Kuben [whites]. Sure, the camera comes from the Kuben, but we still film like Kayapós,” notes Tatajere. 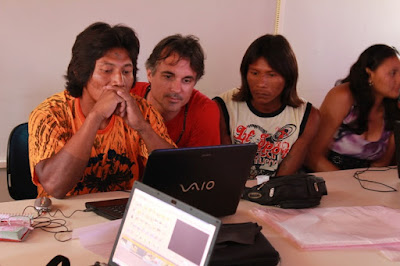 These films, like the ones Turner discusses, reveal a distinctive Kayapó film-making aesthetic: a camera positioned at medium distance to capture full circular dance movements with long, slow pan shots; sparing use of the zoom; avoidance of close-ups that “amputate” body parts or show body ornaments out of context; avoidance of wide panoramic shots in which individuals and their body ornaments become indistinct; resistance to synopsis in favor of complete sequences; and a meticulous inclusion of all participants.

Even in the film about the soccer game at Rio’s vast Maracanã stadium, the cameraman spends as much time filming the audience — and the flight of a remote-controlled blimp — as the game. Time compression is actively discouraged by the home village audience who want to see “everything.” Cutting eight hours of raw footage down to a three hour finished piece is the bare acceptable minimum. Kayapó filmmakers are acutely aware of the demands and criticisms of their intended audience back home, particularly since the films will circulate between villages as an expression of pride and inter-village rivalry. 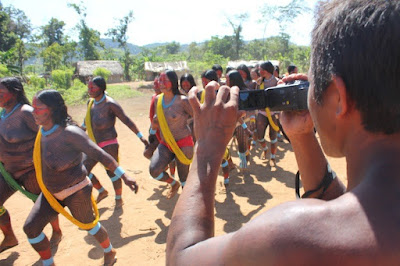 Kayapó film makers shoot and edit with a distinctive style 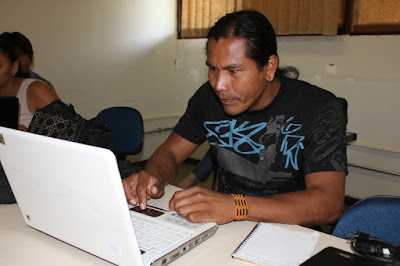 In films of Kayapó ceremonies, the native cameramen demonstrate both a familiarity with the ritual sequence and a certainty in their choice of framing that pulls the viewer into the scene as a welcome and familiar participant, rather than as an outsider observing an exotic spectacle. The combination of repetition, circular movement and an intuitive sense of belonging give these Kayapó films a unique, hypnotic quality all their own.

The Kayapó used video cameras in the late 1980s to show the potentially devastating impacts of hydroelectric dams to far-flung villages. As documented in the 1990 film “Out of the Forest,” these videos helped mobilize the Kayapó and other indigenous groups to join with environmentalists and celebrity backers like Sting in organizing a broad international protest movement against the Belo Monte dam on the Xingú river, ultimately paralyzing the project for more than two decades.[iii] The Belo Monte Dam was recently approved by Brazilian authorities, and the Kayapó continue to protest it, now with support from director James Cameron.

A certain flair for drama and spectacle seems deeply ingrained in Kayapó ritual, politics and social life. Films made by, and mostly for, the Kayapó themselves reflect such native aesthetic and dramatic concerns, while also constructing a new kind of dialogue among villages and with the wider world. Miss Kayapó, both as a fairground spectacle and as a film aimed at Kayapó audiences, is a rich and fascinating example of hybrid culture under construction.[iv] 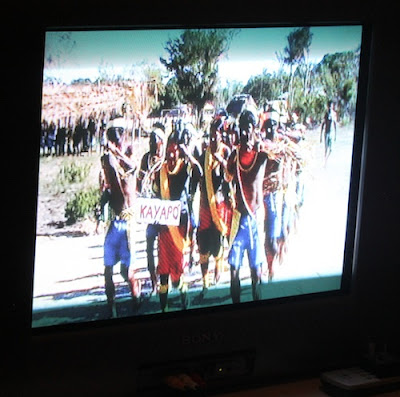 *This posting, takwn from Notes from the Ethnoground, was abridged and edited from an article published by Glenn Shepard and Richard Pace on April 2 in Anthropology News.

[ii] Pinhanta, F. 2006. “You See the World of the Other and You Look at Your Own” in Carelli et al. Eds., Video in the Villages Exhibition: Through Indian Eyes. Brasilia: Banco do Brasil.