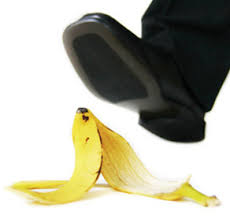 Banana skins, whose only role has long been as the butt of jokes, may gain a new lease of life by helping to clean rivers polluted by heavy metals. Milena Boniolo, who recently gained a doctorate in chemistry at the Federal University of São Carlos in the interior of the state of São Paulo, thought up the idea after watching a TV documentary about the enormous quantity of banana skins thrown away by food manufacturers.

Her idea stems from the basic chemistry principle: opposites attract. Banana skins contain a large number of negatively charge molecules, so they manage to attract heavy metals whose molecules are positively charged. Boniolo has tried out her idea at home. She put the skins out to dry in the sun for a week, ground them into a fine powder and then sieved the powder. She found that 5mg of the powder could clean 100 ml of heavily polluted water. Boniolo developed her idea with uranium in mind but she has found that the technique works with other metals, such as cadmium, lead and nickel.

It is, she says, a simple and very cheap way of dealing with heavy metal pollution. She is now looking for partners so that she can develop the technique on an industrial scale.

*This article is based on an article by Giuliana Miranda in the Folha de S. Paulo newspaper of 31 December 2010.