‘Different representatives of the labor movement, of the environmentalists and the human rights defenders, coincide in saying that, despite not having accomplished 100% [of our objectives], the agreements constitute a triumph for the popular movement and they honor the memory of the martyrs of Bocas del Toro.’
Genaro López

‘In a democracy, the standards of conduct that should be demanded of those functionaries in charge of enforcing the law, including members of the police force, must be much higher than those that are demanded of any citizen…. However, the changes that have been made are opening the door to impunity.’
El Panama America

‘We know that some of the articles that were agreed upon in the dialogue suffered changes and the government will have to explain its actions and the society will have to act as a consequence. On the environmental matters that have been approved… everything is as agreed.’
Raisa Banfield 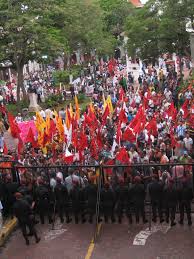 The bottom line? Drawing it calls on all the art and science of the spin doctors, who will each draw it in different places. However, President Martinelli and his cabinet passed a grab bag of some far-reaching laws that were bound to be unpopular, left the country so that he didn’t have to answer questions while it was pending before the National Assembly, jammed it through the legislative process with little debate and in violation of the assembly’s rules. Thus was born Law 30, which met broad and furious public resistance that left at least two dead and hundreds wounded and alienated many of those who would ordinarily be expected to support a right-wing president. Mass shootings, mass firings, mass arrests and conspiracy charges against 17 leaders from across the spectra of both the labor movement and the left did not resolve the crisis. However, the turmoil was put on hold by a simultaneous suspension key parts of Law 30 and of the strikes against it, in favor of a 90-day “dialogue” that appeared unlikely to resolve anything.

As the calendar began to run out on the dialogue, however, all sides were dealing from weakness. The government still maintains some hopes of getting a US-Panama free trade pact ratified by the US Congress, but Law 30’s anti-labor provisions and broad exemptions of projects deemed “in the public interest” from environmental laws were driving that prospect again beyond reach. There weren’t very many complaints about the section promoting and regulating the airline industry, or about criminal laws against forging Panamanian passports and other documents. There were, however, complaints from all corners of society about the exemption of police charged with committing violent crimes on the job from the normal processes of the penal law. It also turned out that important parts of the business sector now find environmental degradation bad for their companies, and a labor movement driven into underground desperation inconvenient for their operations. To the extent that the ban on collecting union dues voided sections of virtually every existing labor contract in Panama and the unions insisted that the breach of one section of a contract was a breach of the whole thing and thus called for renegotiation of the entire agreement (and a possible strike), businesses with union contracts tended to be annoyed with the president’s rash actions.

Indeed, the president’s rash actions became the central subject of public discourse, with Law 30 but the latest and most severe illustration of an impulsive leadership style in which consequences are never thought through beforehand. Sure, Martinelli retained substantial public support, but the disturbances in Changuinola hurt both his approval ratings in public opinion polls and his ability to get what he wants from legislators in his own political alliance.

And the labor movement? Law 30 attacked organized labor across the board, forcing together old foes — anti-communist unions from the old Catholic labor movement and unions that had fought them all through the Cold War; unions led by leftist factions that supported the Torrijos – Noriega dictatorship and unions led by leftist factions that had waged underground armed resistance against the military regime, and had paid for it with dozens of lives. But the labor movement is weak, encompassing less than 10 percent of the private sector work force and only a somewhat larger portion of public-sector workers who are in mostly ineffective organizations. All of the various factions came together to call a one-day general strike, which did not come close to paralyzing the national economy. Moreover, the new-found unity was limited and rarely did the different factions come together for a joint demonstration. Usually the two main labor/left alliances, FRENAESO and ULIP, called simultaneous competing demonstrations in different places.

Law 30 as it was originally passed banned the deduction of union dues from workers’ paychecks, made union dues voluntary, made it harder for a strike to be considered legal and in the event of a strike, legal or otherwise, allowed employers to fire and replace strikers. Essentially it was a death sentence for serious unions. Organized labor could not accept it, but labor leaders from across the spectrum also knew that their position from which to resist it was weak. Reaching some sort of settlement became an existential requirement for them.

So the talks began, with the administration starting out by reneging on its promise to suspend the environmental and police provisions of the law and attempting to exclude environmentalists and civil liberties groups from the talks. That led, in addition to posturing by the most militant of labor leaders and the most reactionary of business and government representatives, to prolonged arguments about the dialogue itself.

It turned out that as weak and divided as Law 30’s adversaries were, they had a strong majority of the public sharing their objections and they were not inclined to give in. On the other hand, as strident as the government and chosen business people at the table may have been, they weren’t winning any friends, and any claims that they had a democratic majority becaue there were more of them at the table than labor’s representatives were laughable.

Thus, with a bit of prodding from the Catholic Church, environmentalists and certain civil society groups were brought in for talks on certain issues, and as the 90-day suspension of Law 30 was about to expire a series of agreements were made.

Organized labor won the most. The right to strike was restored, the right to fire strikers was rescinded, and the union dues provisions for the most part went back to what they were before. Now a member of a dissident union might have the employer deduct dues for his or her preferred organization from his or her paycheck, but a majority union might contract with an employer to deduct a fee for the services of representation from the paychecks of workers who are not members of their union. The unions have dodged Martinelli’s bullet.

On the environmental front, the effective exemption of projects deemed in the public interest from the legal protections that flow from the environmental impact study and permit system was abandoned. However, in its place those activities that are said by their nature to generate only low or moderate environmental risks will not be subject to the study and permit systems, but only be ruled by a set of good practices guidelines. How all of that gets interpreted and regulated is of some concern to environmentalists — especially given the performance of the National Environmental Authority (ANAM) under this administration — so different leaders of the movement split on whether or not to accept the compromise. Mostly they went along with it, as it became apparent that the heavy lifters of the opposition to Law 30, the labor movement, were disposed toward settlement.

The less controversial parts of Law 30 were agreed to, provided that they would, along with the other matters, be submitted to the legislature as separate pieces of legislation. This procedure would also clear up some litigation before the Supreme Court, which challenged the original Law 30 because it violated National Assembly rules against laws that address more than one subject.

The dismemberment and resubmission of the law also avoided an argument about a constitutional provision that requires that matters brought up in a special session of the legislature (as Law 30 was) must be cited in the president’s call to that session. Martinelli’s stealth strategy was to call the special session for consideration of an aviation law, and then present the assembly with a grab-bag bill addressing aviation plus eight other subjects.

What wasn’t agreed to were the impunity for police provisions. The Martinelli administration first pretended that there had been an agreement, then just submitted its unapproved proposal to the legislature anyway. It was left clear that the only on-the-job crimes for which cops would be exempt from ordinary criminal justice were those arising from the excessive use of force. Limiting impunity to “only” battery, mayhem, torture and murder failed to impress Law 30’s critics. Then the government added another provision, which allows for four-month preventive detention of any police officer if it’s deemed useful to impede a coup d’etat or disturbance.

The legislature, with only a little debate, passed the replacements for Law 30 as submitted by the president rather than entirely as agreed in the dialogue. There have followed some arguments about the significance of it all among those who opposed the law. Meanwhile, President Martinelli isn’t going around boasting of victory or explaining why he backed down.

The president comes out of this episode weakened but far from mortally wounded. The labor movement and left come out of it with their weaknesses exposed but also with a tiny bit of progress toward the unity that could strengthen them. The environmentalists may as a practical matter have won nothing of substance because the new version of the law is so vague, but nevertheless they come out of this fight with more supporters and new allies, thus stronger than before. The civil liberties groups come away mocked, cheated and facing increasingly arbitrary rule in lieu of the rule of law, but in political terms they, too, have strengthened their hands.

And the police? They come out of the Law 30 experience less popular, protected against the consequences of misconduct, vulnerable to political suspicions and apparently feared by the president. They are not issuing any public statements about their thinking on the matter.