After long delays in counting the vote, it was finally announced on 26 October that Susana Villarán, the candidate of the left-leaning Fuerza Social party, had won a tight victory in the elections for the mayor of Lima. Nick Caistor*, who has worked closely with the new mayor, looks at the person and the politician. 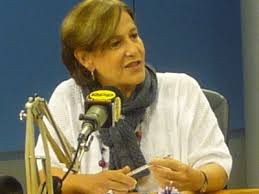 Susana Villarán will make an outstanding mayor of one of the most complex and challenging capital cities in Latin America.

I have worked with her over thworked for over 15 yearase past 15 years. During that time I have seen how her personal qualities of absolute integrity, her straightforward approach to the most difficult challenges, her ability to reach out to people while avoiding the hypocrisy of traditional populist politicking, added to an astounding capacity for sheer hard work, have brought her to the fore in the often murky world of Peruvian politics.

Her own political beliefs are based on the inclusive non-doctrinaire left-wing movements of the 1980s in Peru. This is combined with an equally unorthodox Catholic background that owes much more to Liberation theologists such as her close friend Gustavo Gutiérrez than to traditional Catholicism.

We first collaborated in the second half of the 1990s, when she was one of the most prominent members of the Instituto de Defensa Legal, the Legal Defence Institute. This Lima-based NGO did vital work first in defending innocent people caught up in the state repression of Sendero Luminoso (Shining Path) and other terrorist groups, and then in the efforts to ensure that Alberto Fujimori did not succeed in extending his rule beyond the year 2000.

Susana was closely involved in the peaceful mass protests that helped remove him from power, and revealed the depths of corruption of his regime. We sat through hours of ‘Vladivideos’ shown in the National Congress which laid bare how politicians of all stripes, military chiefs and many other representatives of the state had been bought off by Fujimori’s intelligence chief Vladimiro Montesinos.

These revelations about the extent to which the state and political institutions were corrupt fired in Susana the desire to create a new political force that could offer Peruvians a new, more honest and open political option.

First though she served as the minister for Women and Social Development in Valentín Paniagua’s transitional administration. There she saw direct evidence of the levels of corruption and mismanagement within the ministry itself – one of her favourite examples was the story of how her predecessor had been on safari in Africa (paid for by Peruvian taxpayers) and placed a fake order for half-a-dozen giraffes for the Lima zoo. The animals never arrived, and the funds allotted for their purchase never appeared again either.

When Alejandro Toledo won the 2001 presidential elections, Susana was offered another ministerial post, but was not sure that the Toledo administration would be as broadly based or impartial as the interim government had been. Instead, she became the ombudswoman for the newly-created national police, set up in an attempt to cleanse and modernise a force that had also become greatly tarnished during the years of civil conflict.

From the start, Susana saw her role as to defend ordinary policemen against the official hierarchy. She tried to improve their conditions of service, their pensions, even their uniforms, arguing that only if they had a sense of respect for themselves could they extend that to the citizens whose rights they were meant to be protecting. This won her great support from the lower ranks, but often made her relations with the police hierarchy fraught and complicated.

Few of those who had struggled to get rid of Fujimori and refound the Peruvian state lasted very long in the Toledo administration, and Susana was no exception. From 2003 onwards, she was active throughout Latin America for the OAS Inter-American Commission on Human Rights. Inside Peru, she devoted much of her seemingly inexhaustible energy to helping create a new party, the Partido de Democracia Social or Social Democratic Party.

The PSD was a reflection of her long-held principles of moderate left-wing policies and the inclusion of all Peruvians in the country’s political affairs. However, despite the fact that she tirelessly travelled throughout the regions, the PSD never gained a foothold outside of Lima. When she stood as the PSD presidential candidate in the 2006 elections Susana won less than one per cent of the vote.

Typically, this defeat did not deter her for long. By 2007 she had bounced back to start a new movement, the Fuerza Social (FS), based once again on transparency, participation, and the recognition of the need for renewal of ideas and of generations in Peruvian politics.

Now as the candidate for FS for the office of mayor of Lima she has won the narrowest of victories. In part this was due to the withdrawal of APRA and the disqualification of another leading candidate. But these events only helped focus the voters’ attentions more closely on the personal qualities of the remaining contenders. This meant that support for Susana grew rapidly in the final weeks of the campaign, despite unwarranted attacks by her closest rival Lourdes Flores Nano and her Popular Christian party.

When her victory was confirmed, Susana Villarán promised two things. She pledged to ensure that her administration would be for all the inhabitants of Lima, of whatever political persuasion, and that she would not spare any effort to make her term in office a success. Given her energy and sense of purpose, Lima is in for an interesting and invigorating few years.

*Nick Caistor is the author with Susana Villarán of Peru: Picking up the Pieces, published by Latin America Bureau in 2006.