Above the rooftops of a megacity: The helicopteromania of São Paulo

by Verena Brähler and Solveig Flörke

São Paulo, during the afternoon peak hour, a sheer endless queue of vehicles stretch along the Avenida Rebouças in São Paulo’s upper-class neighbourhood Pinheiros. The exasperated drivers are literally stuck in the streets. They suspect they are part of a grim experiment that is testing the patience of drivers in a reactionary signal system where the green light on the traffic lights switches to red after a mere two seconds. Then suddenly they hear a scornful Zoom-Zoom-Zoom above their heads that easily drowns out the honks 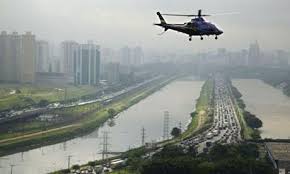 of the drivers. Looking up they see a helicopter dashing through the sky, unaffected by traffic and the frustration of the drivers.

With around 500 registered helicopters and 700 flights per day, the metropolitan area of São Paulo with its 20 million inhabitants has the biggest helicopter fleet in the world – even larger than in New York and Tokyo. Every minute the loud machines rumble over the rooftops of the skyscrapers and hotels. In Brazil’s financial metropolis time is money and, with the streets being so highly congested, everyone that can afford it takes a helicopter for their day-to-day business operations. Most of the helicopters start their journey at the Campo de Marte airport. It takes only five minutes by helicopter from there to the centre of the city to the north (distance of 11.3km), compared to around 50 minutes by car.

Around seven million vehicles are responsible for the daily 150km ‘Stop and Go’ traffic in the municipality of São Paulo. Five million cars compete with 42,000 buses, 160,000 trucks and 875,000 motorbikes on the highways and roads of the megacity. According to the figures of the Municipal Secretary for Urban Development, the number of vehicles has more than quadrupled since 1980. And congestion is the price: whereas the average traffic speed during the afternoon peak hours was 24.9km/h in 1980, it is now only 14.8km/h.

Jorge Bitar Neto is the president of Helimarte, a helicopter taxi service. He names several reasons for the increasing use of helicopters: the logjam in the road traffic, the inefficiency of the public transport system, the lack of security, and the fact that there are enough rich people who can afford to buy or rent helicopters. His business offers a range of different helicopter services: business flights, cash transports, romantic helicopter flights by night, advertisement flights and even transfer flights for Formula 1 pilots during the World Championship. A relatively new service is to take brides to church by helicopter so that they can get to their wedding unaffected by traffic and bad weather conditions.

Yet the predominant reason for travelling by helicopter in São Paulo is simply that time is money. ‘I cannot even remember what a traffic jam is’, says Amilcare Dallevo Junior, president of the RedeTV. It takes him five minutes to get from his home in Alphaville to his office in Avenida Juscelino Kubitschek. ‘If I didn’t take a helicopter, I would not be able to get to all of my appointments.’ His Esquilo AS 350 B3 skirts above the city’s aerials but for the businessman the landscape below is not even worth a second glance: ‘I take helicopters to save time. In the past I would have never imagined that one day I would need a helicopter for my work but in this way I manage to do three times as much work than if I were travelling by car.’

However, what many businessmen simply see as better time management and greater comfort, is, in fact, harassment for most of São Paulo’s residents. The noise of a passing helicopter is so loud that residents are disturbed in their daily routines – sleeping, talking, working and studying. Housewife Martha Oliveira says that around 50 helicopters rumble above the sky of her street every day. Even though she keeps her windows shut, often the noise wakes her up or stops her from continuing a telephone conversation.

By far the worst of all helicopter flights is the ‘voo pairado’ [hovering flight] where helicopters hover above the same place for a long time. This is often used in TV coverage and it is also a common strategy used by the military police to chase criminals or track stolen cars via GPS.

In an attempt to address the disturbances caused by helicopters in São Paulo, city councilman Chico Macena proposed a law in 2007 that would have prohibited the departure and arrival of helicopters between 8pm and 7am, plus requiring all helicopters to keep a minimum distance of 500 meters from all public buildings that are sensitive to noise, such as hospitals, schools and universities.

São Paulo’s mayor, Gilberto Kassab, is himself affected by the noise because his office is in a district which a helicopter crosses every ten minutes. However, he himself is also a frequent user of the ‘helipontos’ [helipads]; in 2010 he was flying on average 19 hours per month by helicopter. That is why he vetoed Macena’s draft and made some drastic amendments to the law that finally came into effect in October 2010: the departures and arrivals of helicopters are now prohibited between 11pm and 6am and the minimum distance from public buildings is only 300 metres. The ‘voo pairado’ is limited to 30 minutes and all helicopters and ‘helipontos’ need to be licensed by the city hall (before the new helicopter law, 129 of the 215 helipads in the city of São Paulo were not authorised). Violations of the law are punished with fines between 700 and 29,000 Reais, depending on the size of the aerodrome and the type of violation.

It is questionable how much alleviation this new law will bring to the level of noisiness in São Paulo. Yet, according to Carlos Alberto Artoni, the former president of the Brazilian Association of Helicopter Pilots (ABRAPHE), residents in São Paulo seem to have lost their right to tranquillity long ago: ‘Those who want to hear birds sing should live outside São Paulo. Here you have to get used to modernity.’