Latin America BureauNews, analysis and information on Latin America, its people, politics and society.
HomeTopicsClimate change & carbon tradingMEXICO: Cancún is indeed a nest of serpents – sitting in a...

MEXICO: Cancún is indeed a nest of serpents – sitting in a vast, toxic rubbish dump

Cancún is indeed a nest of serpents – sitting in a vast, toxic rubbish dump

Let’s hope the UN climate change convention will expose the devastation wreaked on Mexico by its government’s negligence.

Next week, Mexico hosts the UN convention on climate change in Cancún. It is ironic that such an important conference on the environment should take place in a country whose environment has been devastated, and in a city that exemplifies everything you should not do if you wish to protect the environment.

Cancún the city perfectly illustrates the light and shade of uncontrolled development; it is an emblem of both modernity and backwardness. Cancún – “nest of serpents” in the pre-Hispanic language – was born four decades ago from a government decision. A place of great natural beauty – a deserted island separated from the mainland by narrow channels, a series of lagoons, and a stretch of coast surrounded by virgin rainforest and pristine beaches – it was decided that it should be transformed into the country’s most important tourist attraction. 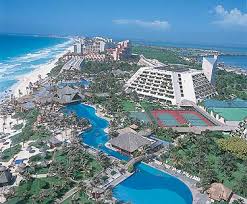 Hundreds of tons of concrete, steel and glass were used to create “the bankers’ dream” – a massive enterprise involving developers, politicians and multinational hotel chains who financed the construction of more than 27,000 hotel rooms and an urban centre with more than 700,000 inhabitants. The project has proved to be ecocidal, and left thousands without proper sanitation or adequate water or electricity.

Cancún draws in foreign currency and attracts almost half of Mexico’s tourist trade; at the same time, it is a symbol of poverty. This expanding city in a nation without jobs draws in every kind of fortune seeker – money launderers, sex traders, drug traffickers.

In reality there are two cities, linked by a broad avenue, that share a name. One is the city of privilege and pleasure, the other a place of scarcity. There can be few places less appropriate for a world climate change conference.

The lack of care for the environment is not limited to Cancún. It is no exaggeration to describe Mexico as environmentally devastated. It has become a vast rubbish dump. Its water tables are contaminated, much of its best land is polluted and eroded, and its forests have been destroyed. Industrial plants and opencast mines discharge their waste without precautions. Huge urban concentrations pollute the water tables and consume agricultural land, while the tourist megaprojects devour beaches and rainforests.

Everywhere tons of toxic, non-biodegradable waste piles up – plastics, batteries, tyres, harmful chemical and industrial waste. Though they are now prohibited, the secret cemeteries of the chemical PCB, a highly toxic substance once used as an insulant and refrigerant in transformers and electrical equipment, still remain untouched. Their effect is chronic, cumulative and bio-accumulative; they can cause cancer and affect the hormonal system.

Together with the environmental crisis there is a massive crisis of sanitation. The emergence last year of the H1N1 flu virus in the industrial pig farms of Perote, Veracruz, was perhaps a warning sign. The hundreds of urban refuse dumps are vast incubators of serious illnesses. The proliferating, unregulated industrial developments are a breeding ground for genetic mutations, leukaemia and anencephaly. The toxic wastes discharged into the Atoyac river, in the state of Tlaxcala, have already killed the local fauna and are now causing cancer in the local population, according to a study by Mexican researchers published in the Oxford journal Mutagenesis.

Weak environmental regulations and corrupt government authorities, together with commercial agreements that allow the environment to be destroyed with impunity, mean that the multinational corporations have a licence to destroy. The entry of China into the World Trade Organisation in 2001 deprived Mexico of its comparative advantage for attracting capital – the supply of cheap labour. In reality, though without announcing it publicly, the Mexican government has offered the multinationals total environmental deregulation, closing its eyes to the violations of existing environmental laws. This has accelerated a tendency already visible in the country since the implementation of the North American Free Trade Agreement (Nafta) in 1994.

In Mexico, the federal laws regarding the disposal of solid waste are in reality a dead letter. There are almost no municipalities that fulfil their obligation to separate, recycle and reuse waste. At the same time, the privatisation of refuse collection, transfer and disposal services has intensified.

This invisible environmental degradation has provoked protests by those who live with it day to day. But defending the environment can be a dangerous business: it can cost you your life. It is believed that Ruben Flores Hernandez, a forest ranger in the state of Morelos, was murdered last April by people ravaging the forest. And he is not alone. In recent years more than 30 environmentalists have been killed.

The Cancún conference will offer a window on the resistance to environmental destruction that is taking place in Mexico. That, at least, is the hope of the organisations of those affected by it. They want to turn the conference into an opportunity to show the world the gravity of the situation they are living through and expose a government that talks about protecting the environment while doing everything to ensure its destruction.