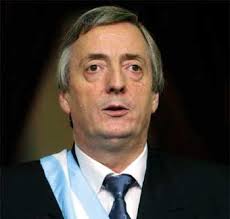 The past president of Argentina, Nestor Kirchner, has died unexpectedly of a heart attack.

U.S. media aren’t likely to give us much coverage that indicates what Kirchner meant to many people in South America. This is a pretty safe bet, in part because to understand what Kirchner meant, you have to understand Kirchner’s role in a story that the U.S. media have never told properly: how, in the last 15 years, South America has been breaking free of Washington-prescribed economic and security policies. Since the US media never told this story, they’d be hard put to explain Kirchner’s role in it.

The Christian Science Monitor runs an AP story that gives a little taste of what lies underneath, “Nestor Kirchner remembered as Latin American statesman”:

The leader of the human rights group Grandmothers of the Plaza de Mayo, Estela de Carlotto, said Kirchner “gave his life for his country.” “Our country needed this man so much. He was indispensable,” she told radio Continental.

Kirchner served as president from 2003-2007, bringing Argentina out of severe economic

crisis and encouraging judicial changes that set in motion dozens of human rights trials involving hundreds of dictatorship-era figures who had previously benefited from an amnesty.

As secretary general of the Union of South American Republics, or Unasur, Kirchner mediated one of the many recent disputes between Venezuela and Colombia. Both countries’ leaders mourned his loss on Wednesday.

It’s true, as AP says, that Kirchner brought Argentina out of severe economic crisis, and that would be enough for many Argentines to remember him fondly. But part of how he did that was defying Washington and the International Monetary Fund, putting the need to revive Argentina’s domestic economy ahead of the demands of foreign creditors. And that’s why you shouldn’t be surprised if the U.S. financial press, for example, has a slightly different take on things.

Oliver Stone’s recent documentary “South of the Border,” in which he interviews several South American leaders, has an extended interview with Kirchner (available onYou-Tube), during which he relates that former President Bush told him that the best way to grow the U.S. economy was by waging war: