Latin America BureauNews, analysis and information on Latin America, its people, politics and society.
HomeCountriesBrazilBrazil: the latest round in the Guarani struggle

Brazil: the latest round in the Guarani struggle

Brazil: the latest round in the Guarani struggle

Just off São Paulo’s Avenida Paulista, the street lined with the solid temples of the headquarters of Brazilian and foreign banks, stands the federal court of criminal justice. Last week, among the smart young women lawyers in high heels with mobile phones clamped to their ears, the beefy black-shirted federal policemen and the defence and prosecution lawyers swishing melodramatically around in long black gowns, sat a tight group of Guarani Indians with feathered headbands, beads and clothes that somehow brought a whiff of the red earth of Mato Grosso into the courtroom. 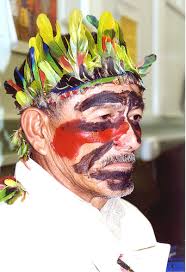 Many of them were the children and grandchildren of Marcos Verón (pictured), a 73-year-old Guarani indian leader, who was battered to death eight years ago, after leading his people on a “retomada”, or re-taking, of what they say is their traditional land, occupied by the cattle ranch Brasília do Sul.

Looking down from a wall behind the lawyers was a large black and white photograph of the murdered man. His sombre, lined face seemed to be demanding justice.

Three of the ranch’s security guards were on trial for the murder. The trial was held in São Paulo because the prosecution said that it would be impossible to hold a fair trial in the openly anti-indigenous climate of Dourados, the city in Mato Grosso do Sul that would normally have dealt with the case.

In the middle of the night of 13 January 2003, the indians’ camp was attacked by over 30 men in pickup trucks, some of them armed. According to the prosecution, many of the indians, including women and children, were beaten, thrown into the trucks and dumped on a roadside. Marcos Verón died of his injuries.

The three accused denied the murder charge, and gave a much more innocuous version of events. Carlos Roberto dos Santos admitted he had been called by the ranch owner in the middle of the night to join a posse of men going to expel the Indians. He said his only task had been to let off fireworks to frighten them. According to him, it had been so dark that he had been unable to see what was happening to the Indians.

After five days the jury found the three men guilty of kidnapping, grievous bodily harm and torture, but acquitted them of homicide. They were each sentenced to 12 years imprisonment but, as they had already spent four years in jail before the trial, they were granted bail to await the appeals which will be presented by both defence and prosecution.

Both sides claimed partial victories. For the Guarani, the jury’s failure to convict for murder was disappointing, but the fact that there had been a trial at all sent an important message that today such crimes are no longer ignored. For the accused, it was a relief that the men were acquitted of the most serious charge. The trial of the rancher, who is accused of being the ‘intellectual author of the crime’, and of the other men facing charges will take place shortly.

It is too early to say what effect the ruling’s mixed message will have in Mato Grosso do Sul, home to some 45,000 Guarani, who once occupied three million hectares but are now confined to an area of less than 50,000 hectares. As their land has been progressively occupied over the last 70 years, first by cattle ranches and more recently by soya farms, the Guarani have been squeezed into smaller and smaller areas – rural favelas, where rates of alcoholism, violence and suicide have all exploded.

The “retomadas” are the Guarani’s way of putting pressure on FUNAI, the National Indian Agency, to demarcate their traditional lands. Dirce, one of Marcos’ Verón’s daughters, who was at the trial, said they had returned to the camp to bury the old man in his ancestral land, and had remained there, planting crops, while the lengthy demarcation process moves slowly forward.

But now a new economic cycle has begun in Mato Grosso do Sul, pushing out many of the cattle ranches and soya farms. This time it is sugarcane, used to produce the biofuel ethanol, that is behind the boom. Indeed, some indigenous villages are already surrounded by huge fields of sugar-cane. Families near the plants that are processing the cane into ethanol say that their water is being polluted by effluents and pesticides and that there is a constant stench in the air.

Five hundred years after the Europeans first arrived, the Guarani are still fighting the invaders who have taken their lands.Today their foes are not Portuguese and Spanish conquistadores but powerful corporations.