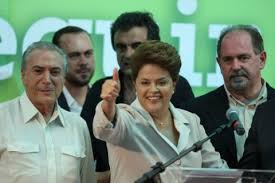 When, a year ago, President Lula announced that he wanted Dilma Rousseff, then chief of staff in his government, to succeed him as president, his choice was met with dismay by many in the ruling Workers’ Party (Partido dos Trabalhadores PT). She was seen as a bossy bureaucrat, without an ounce of Lula’s charisma. The opposition ridiculed her as a robot without a mind of her own who would be manipulated by her mentor, Lula. During the election campaign she became a punchbag for the opposition, for the mainstream media and for many within her own party. Even the fact that she had been treated for cancer was used to show she was  ill and vulnerable — the wrong choice,. A lesser woman would have given up.

On 1st January, the day of her inauguration, Dilma had her revenge on all those who had belittled and ridiculed her. She carried off with style and endurance an exhausting day of ceremony, pomp and speeches, of walking up and down Brasilia’s long ramps, of hundreds of handshakes, embraces and kisses. In power, the frog suddenly became a princess.

She introduced little touches to signal her wish to be not only a woman president, but a woman’s president. Her black-suited bodyguard were all women. Six of the motorcycle escort were women. Nine of her ministers are women – she had wanted more, but the parties who make up the ruling alliance refused to find more women among their ranks, preferring old male politicians. And in Congress, where she made her first speech as president, among deputies, senators, governors from all over Brazil and foreign envoys, was a very special group of women — former female political prisoners, who had been imprisoned and tortured alongside Dilma during the military dictatorship.

In her speech Dilma said she had come to open doors so that other women could become president, to honour women, to protect the weakest and govern for all. She said she wants to eradicate extreme poverty, rescue millions from impoverishment and turn Brazil into one of the most developed and least unequal countries in the world.

Known as a “developmentalist” who does not see anything wrong with building roads and dams in the Amazon,she also made several encouraging references to the environment, saying,“I want to show the world that it is possible to grow fast without destroying the environment.”

And while she described pre-sal, the huge new deepwater offshore oilfield, as “Brazil’s passport to the future”, Dilma promised that alternative renewable energy sources like biomass, wind and solar energy would also receive big incentives, alongside ethanol and hydric power.
If this happens, it would be a radical change, because up until now wind and solar have benefited very little in the way of incentives or technologyinvestment. As a result, Brazil lags far behind other countries like China, in an area which it could be leading.

Only at the end of her long speech did Dilma make a poignant reference to her own past. She said: “I have dedicated all my life to the cause of Brazil. I gave my youth to the dream of a fair and democratic country. I was subjected to the extreme maltreatment inflicted on those who dared to challenge oppression. I don’t regret that, and neither do I harbour resentment or rancour”.

Then the former political prisoner went out to review the troops lined up outside congress.

It is definitely the beginning of a new era in Brazil. The age of Lula is over, and the Dilma government could offer many surprises. Aided by the return of Antonio Palocci to the government, she is expected to run a much more austere government. Brazil is enjoying an economic boom with full employment – even McDonald’s is finding it hard to recuit staff – and rising prices for its commodities on the orld market. But the world is a turbulent place and nobody knows how long this will last. Dilma does not have the charisma of Lula, but as an experienced economist and administrator, she has advantages that Lula didn’t have.

There is no doubt that improving conditions for Brazil’s millions of poor women will be a priority. This means better healthcare, better education, better information and a trickle down effect on their families. And, unlike Lula, she will not be evasive about human rights, including unresolved questions left behind by the dictatorship.

But the environment remains a questionable area, because she has championed the building of the controversial Belo Monte dam on the Xingu river, although it is strongly condemned by environmentalists, scientists and indigenous groups.

Dilma is well aware of the complex task she has taken on, as she showed in the opening remarks of her inaugural speech: “the green and yellow silk of the presidential sash may appear to be soft, but it carries with it an enormous responsibility to the nation.”