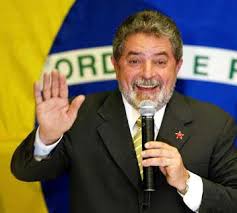 On 3 October Brazil will elect a successor to Luiz Inácio Lula da Silva, its first working class president, who has governed Brazil for eight years. Huge expectations were placed on Lula, when he came to office in January 2003. The global left hoped that, along with fellow President Hugo Chávez in Venezuela, Lula would help construct a radical alternative to neoliberalism. This hope was reinforced when Evo Morales was elected on a more radical platform in Bolivia in 2005. Has Lula delivered?

It is difficult to remember nowadays, with Brazil riding high on a wave of international prestige, that the atmosphere was very different when Lula came to office in January 2003. Fearful of the prediction made by the financier George Soros that Brazil would face “chaos” under Lula, bankers had pulled US$60bn out of the country. The national currency, the real, had lost 30% of its value and some rating agencies were putting ‘Brazil risk’ at over 1,300 points, one of the highest rates in the world. Fear that the country would be forced to follow Argentina into default was visible in Lula’s tense body language. His anguish was evident to his close aides.

Now, almost eight years later, Lula is a different person. Relaxed and self-assured, he is clearly very happy with his achievements. Indeed, the numbers speak for themselves. The purchasing power of the monthly minimum wage, the benchmark by which all wages are set, has increased by over 50%. Some 12 million new jobs have been created. About 20 million Brazilians have been lifted out of absolute poverty. The country’s foreign reserves have risen to the very comfortable level of US$239 billion, compared with its position in December 2002, when Brazil had to ask the IMF for the largest stand-by credit it had ever supplied, of US$30bn, to avoid default.

Lula is scarcely able to contain his delight that all this has happened on his watch. “Just think of it”, he joked last year. “Brazil used to be in debt to the IMF (International Monetary Fund) and we had to adhere to all those conditions they imposed. But now it’s us who are bailing them out with a ten billion dollar loan!” Back in 1941 the Austrian author Stefan Zweig, who was living in Rio de Janeiro, wrote a book praising Brazil as “the country of the future”. This led Brazilians (who, like the British, are good at laughing at themselves) to joke that “Brazil is the country of the future and always will be”. But not any more, it seems. Brazil’s time has come.

But, from the point of view of the left, what does this mean? The Lula government has not changed fundamentally the model of development. Brazil’s obscenely high level of income inequality has declined somewhat (from 0.53 to 0.49 on the Gini index) but this is not because wealth has been redistributed from the rich to the poor. Instead, the Lula government has introduced social welfare policies that have meant that, while incomes for all Brazilians have grown, those of the very poor have grown the fastest. Even so, the poverty, inequality and violence encountered daily in Brazil’s mega-cities, where 40,000 people are murdered each year, mostly by the police, remain the country’s most serious problems. Yet these issues have scarcely been discussed at all in the electoral campaign, not even by the PT’s candidate, Dilma Rousseff, who, with Lula’s explicit backing, is expected to win the election, possibly in the first round.

Land concentration, one of the most extreme in the world, has actually increased under Lula. It is today worse than it was back in the 1920s, just three decades after slavery was abolished. With generous government support, agribusiness has flourished, with a massive expansion in soya and sugar-cane plantations. More than ever Brazil’s global success stems from its export of commodities, above all to China. The share of primary products in exports has leapt from 23% in the first half of 2000 to 43% in the same period in 2010, with a concomitant decline in the share of manufactured goods, from 74% to 54%. Many economists are worried that this return to heavy dependence on primary products bodes badly for Brazil’s long-term future, but the Lula government is confident that food crops, minerals and renewable energy (particularly ethanol from sugar-cane) are fast emerging as some of the hottest tradable goods on the world market.

What is clear, however, is that agrarian reform, strongly promoted by Lula before he gained office, has taken a back seat. His government has not settled any more families on the land than his predecessors, and three-quarters of the land given to landless families is located in the remote (and often ecologically fragile) Amazon region. Indeed, the government has pushed ahead with disastrous old-style development policies in the Amazon basin, with the continued destruction of the rainforest to build roads and hydroelectric power stations that will largely benefit big companies and agribusiness. It is refusing to listen to the growing number of scientists who are warning that such devastation will do irreversible damage to Brazil’s rainfall patterns (and thus to the much-acclaimed agricultural exports).

Yet it would be mistaken to see Lula’s programme as the mere continuation, perhaps with a more humane face, of the neoliberal policies implemented by his predecessor, Fernando Henrique Cardoso. Credit must be given to Lula and his foreign minister, Celso Amorim, for their fierce opposition to the attempt by the USA to turn the whole of the Americas into a single free trade area – the Free Trade Area of the Americas (FTAA) – by 2005. Without their determined stance, this might have actually happened, and one only has to look at Mexico today to realise what a disaster this would have been for the whole region.

Since Mexico joined NAFTA in 1994, the country has been reeling: its family farms have been all but wiped out by the unceremonious ‘dumping’ of surplus US crops, particularly maize, on its market; there has seen a substantial increase in social inequality, with the country having the dubious honour of being the first developing country in the world to produce the world’s richest man (Carlos Slim, the telecoms tycoon); and there has been a big rise in violence, much of it drug-related. Mexico is fasting becoming a “failed state”. Even President Felipe Calderon said earlier this year that his current ferocious crackdown on crime was necessary to defend “the very authority of the state”.

Lula has also been clear-sighted in his determination to reverse the extraordinary wave of privatisations carried out by Cardoso, under which many large and viable state companies were sold for a song to multinationals. To head the country’s powerful development bank, BNDES, Lula appointed the economist Luciano Coutinho, who favours the development of “Brazilian champions”, that is, powerful national companies, the equivalent to South Korean chaebols and Japanese keiretsu. Disbursing over the last two years a huge amount of money – RS$189bn (£66bn), more than the combined amount lent during the period by the World Bank, the Inter-American Development Bank and the US Eximbank – the BNDES has funded mergers and takeovers, as well as investing heavily in roads, railways and hydroelectric power stations, all seen as crucial for national development.

Under BNDES stewardship, JBS-Friboi, the largest Brazilian multinational in the food industry, has taken over all of Argentina’s largest beef producers and the beef division of Smithfield, the world’s largest pork producer and processor. It is now the world’s largest producer of beef. Companies like Odebrecht, Camargo Correa and Andrade Gutierrez, which used to be large domestic construction firms, have grown into gigantic, diversified conglomerates, with investments in a whole range of activities in many countries. Because of this massive consolidation, big Brazilian companies are no longer vulnerable to old-style takeovers by multinationals. Royal Dutch Shell, the world’s largest private sector oil company, will shortly be announcing a tie-up with Cosan, Brazil’s largest sugar and ethanol producer. But because Cosan is so clearly a world leader in its own right, this is a marriage of convenience between partners of comparable clout, each with separate areas of expertise.

But what does this add up to? There is concern on the left in Brazil. Fernando Cardim, from the Universidade Federal do Rio de Janeiro, said recently that, while it was true that the Lula government had brought back the old concern for development, something that had been completely abandoned by Cardoso, it was not development for the people but to strengthen large national monopoly conglomerates. This is clearest of all perhaps in the Amazon basin. Local hamlets, such as the fishing communities in Mangabal along the Tapajos river, which have been there for a hundred years, are being evicted to make way for a hydroelectric power station to provide energy at highly subsidized prices for smelters to produce aluminium for export. And the BNDES is funding giant plantations of genetically modified eucalyptus in eastern Amazonia, instead of helping the region’s small rural communities to farm the land sustainably. Others fear that Brazil is turning into a regional superpower, just as ruthless and exploitative as the old imperial powers.

However, this seems a partial and inadequate interpretation of what has been happening. Under Lula the Brazilian state has gained greater control over the country’s destiny. It is clearest of all in foreign policy where, without Lula’s firm stance, the Israelis would have encouraged the resource-rich east of Bolivia to secede and the USA would probably have dared to intervene more openly to overthrow Hugo Chávez. With Brazil’s support, Unasul (Union of South American Nations) and CELAC (Community of Latin American and Caribbean States) were born, both autonomous regional organizations without the participation of the USA and Canada. Together, they spell the end of the OAS, the old regional body that has long been an arm of US foreign policy. According to João Pedro Stedile, from Brazil’s Landless Movement (MST) and a leading political analyst, “The Lula government adopted a progressive foreign policy. Compared with Cardoso’s neoliberal policies, which were totally subservient to the interests of imperialism, this is an enormous advance, because we now have a sovereign policy, decided by us.”

Stedile has no illusions as to what can be expected over the next few years. “The world is dominated by 500 big internationalized companies that control 52% of the global GNP and employ only 8% of the working class. The consequences on a global level are disastrous, because all national populations and governments have to be subordinate to these interests.” There is no sign yet, he says, of an end in the prolonged crisis that has affected the global left. “We are living through a period of ideological and political defeat. It is a period of reflux for mass movements. But it is a period, a wave. Soon we will be entering a new phase.”

Within this fairly gloomy prognosis, he is cautiously optimistic about what can be achieved under Dilma Rousseff, perhaps because of her past as a committed left-winger. “In this situation we think that a Dilma victory will allow a more favourable correlation of forces for us to make social conquests, including changes in agricultural and agrarian policies.”