Latin America BureauNews, analysis and information on Latin America, its people, politics and society.
HomeTopicsEconomy, trade & employmentBreaking away from the USA

Breaking away from the USA

The political, economic and social scenario of Latin America is going through significant changes. Disillusionment with the belief that market forces can be the instrument for overcoming poverty has paved the way in some countries in the region to the emergence of political leaders who, critical of this faith in the market and the international system related to it, are seeking to strengthen the role of the State. The emergence of new popular leaders, the exhaustion of an economic cycle dominated by the idea of liberalising markets, and the strengthening of the logic of national policies are important issues at this juncture. At the same time issues, such as the questioning of the centrality of the United States in hemispheric and global matters, the increase in price of agricultural commodities and minerals, the growing importance in the investment and trade with China and the intensification in flows of intra-regional trade, are extending the rate of change, in that they are giving Latin American countries greater scope for manoeuvre.

Thus, an important part of the agenda of inter-American relations is no longer governed by US economic and security interests and has begun to reflect new projects and goals, some of them competing with policies set by Washington. New instances of regional governance in Latin America,

such as the Community of Latin American and Caribbean States (CELAC) and the South American Community of Nations (UNASUR), are growing stronger as compared with existing hemispheric bodies such as the Organisation of American States (OAS), the Interamerican Development Bank (IDB) and the Inter-American Defence Board.

However, it is increasingly difficult to speak of Latin America as a totally homogeneous unit. Although historical and cultural elements are common to some countries in the region, as well as the challenge of designing development policies that will reduce social injustice and poverty, there are important differences between the nations with respect to political and institutional stability, growth, economic trade, territorial size and development strategy, all of which have important consequences for foreign policy objectives, including the relationship with the United States. In general, the countries of Central America and the Caribbean (even though Antigua and Barbuda, the Dominican Republic, Nicaragua, Saint Vincent and the Grenadines are members of the Bolivarian Alliance for the Americas –ALBA) remain heavily dependent on the relationship with the United States, a situation enhanced by the CAFTA-DR free trade agreement. In other words, there are objective questions and historical and geographical links that affect the action of these countries. Perhaps the case of Mexico is emblematic in this sense. In South America the situation is different, but even so there are important variations, with Colombia and Venezuela representing two different perspectives. In recent years Brazil has become an increasingly indispensable interlocutur. To sum up: the USA has different levels of influence and different forms of relationship with the countries in the region.

It is clear that from 2001 the importance of Latin America in overall US foreign policy priorities has decreased considerably, with the USA’s new strategic priorities with respect to regions and issues of foreign policy, especially security issues and combating terrorism. There is no structured policy for Latin America, which many countries in the region see as something positive, given part of the USA’s history of interventionist and destabilising policies towards the region. There are some actions focused on US bilateral relations, especially with the countries of Central America and the Caribbean, Mexico, the Andean countries and Brazil, which also indicates that it is difficult to speak of an overall hemispheric approach.

Among US domestic institutions – Congress, the State Department and the White House – little importance is given to the region, especially in comparative terms. Moreover, foreign policy towards Latin America is formulated in a context where the focus is on the US’s economic recovery from the effects of the 2008 crisis and on job creation, and where conservative parts of the electorate are gaining a greater voice. Moreover, priorities seem to be set by the perception of threats. For Latin America there are specific policies for combating illicit drugs trading and weapons and for immigration. There is also some diffuse concern, especially in Congress and some think tanks, about ALBA and its member countries, although in reality this integration project has only a very limited impact on the region’s overall economic and political life. The failure of negotiations over the Free Trade Agreement of the Americas (FTAA), visible in the fourth Summit of the Americas in Mar del Plata in 2005, demonstrates the difficulty of implementing a regional agenda that is not attuned to the interests of the most important countries in the region.

Since the early 1990s, the proposed hemispheric trade integration by the USA galvanised Brazil into seeking to strengthen regional integration within the Southern Cone and South America. In recent years, Brazil has gained considerable international prominence, partly as a result of its social and economic achievements. This has increased the interest of neighbouring countries in deepening their relationship with Brazil, including closer trade links. Within its possibilities, Brazil’s policy of regional cooperation has contributed to the stability and economic development of neighbouring countries. This is partly because, in Brazil’s view, unstable situations can spill over into the rest of the region, as well as provoke US intervention, which is something that Brazil wishes to avoid. In the US perspective some policy-makers view Brazil as a moderating force, compared with other South American leaders who have adopted confrontational rhetoric or polices with respect to the USA. The fact that the two countries do not always agree in their approach to questions of importance to hemispheric relations does not prevent them from working together on specific issues such as energy, education, defence and others

Despite the differences between Mercosur, UNASUR, ALBA and CELAC, they all have in common the fact that they were the result of Latin American initiatives, undertaken by countries that are seeking greater autonomy in their relationship with the United States, part of a broader movement that is seeking a multipolar international order. They are seeking to create an economic and political space for Latin and 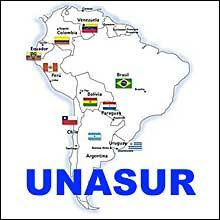 South America through the strengthening of regional cooperation mechanisms. The formation in 2008 of the South American Defence Council, under UNASUR, is relevant in this sense, since the countries of South America do not have a history of cooperation on the issue of security and had previously allowed discussion of these issues to be part of their relationship with the United States or to be held in the auspices of institutions created in the shadow of US hegemony, such as the OAS. It seems that the South American security system was created to strengthen cooperation on issues of defence and security and to establish a counterweight to US penetration in South America or, more precisely, in the Andean region. There is an effort to link the goals of reducing poverty and social inequalities, present in the Treaty that set up UNASUR, with the desecuritisation of some problems faced by countries in the region. The idea is to use UNASUR’s own institutions to resolve disputes and tensions in the region, as happened in the cases of the institutional crisis in Bolivia in 2008, the reaction to the use of US military bases in Colombia and the tension between Colombia and Venezuela in July 2010.

Another important factor for understanding the new dimension in the relationship between the United States and Latin America is the impact of the emergence of China and the relationship of the countries in the region with the Asian giant. Historically, US action with respect of Latin American countries always became more specific and direct in situations where it felt that the action of other extra-hemispheric powers threatened its interests in the region or challenged its influence. It is still too early to if this will be the case with China. From the perspective of Latin American countries, increased trade with China may build up their bargaining power with Washington and make it possible for them to gain greater autonomy. This trend is less intense in the countries of Central America and the Caribbean and in Mexico and stronger in South America, especially in countries like Argentina, Brazil, Chile, Colombia and Peru. The question is that this closer link with China can also generate a new form of centre-periphery dependence, since the export basket to China is mainly composed of agricultural and mineral commodities. One issue that needs to be discussed is the impact of the relationship with China on regional integration projects in South America and on inter-American relations more broadly.

The hemispheric and global context of the sixth Summit of the Americas to be held in Cartagena, Colombia, in April 2012, is certainly different from the context in which the first meeting was held in Miami in 1994. At the meeting in Trinidad and Tobago in 2009 President Barack Obama emphasised the need for mutual respect in relations between the United States and Latin America and his desire to construct actions based on common interests and shared values. This seemed to indicate the possibility of new perspectives but two years have passed since then and few advances have been made. Moreover, the United States and the Latin American countries took different positions over the crisis in Honduras in 2009. The positions towards Cuba also indicate different perspectives. The time has come to reflect over the nature of the relationship between the United States and Latin America in the 21st century, taking into account the factors mentioned above. From a Latin American perspective the idea of creating or reinforcing new spaces for political negotiations towards the construction of a new regional identity, as represented by the creation of CELAC, is consolidating, although the specific contours and effectiveness of these new institutions are not yet clear.

* Haroldo Ramanzini Júnior is a researcher at the National Institute of Science and Technology for Studies on the Unites States (INCT/INEU) and lecturer at the Federal University of Uberlândia (UFU).