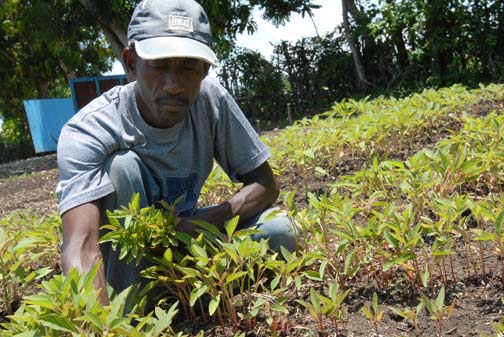 The trade policies enacted under the Clinton administration in the 1990s ruled out the possibility of a future for Haiti’s roughly 3 million small farmers. This is according to the former US president himself. In March, Clinton, who is now the UN Special Envoy to Haiti, admitted that US free market agricultural policy towards Haiti “has not worked.” He told journalist Kim Ives, “ . . . We made this devil’s bargain on rice. And it wasn’t the right thing to do. We should have continued to work to help them be self-sufficient in agriculture.”

However, when discussing the possible future of Haiti’s agriculture at the International Donor’s Conference in New York on March 31, Clinton did not mention restoring the rice crop he helped destroy. “We’re thinking about how can we get the coffee production up, how can we get . . . the mango production up . . . the avocados, lots of other things,” he told Ives. The fact that his home state of Arkansas is the largest producer of rice in the United States perhaps led to the omission.

Many of the solutions put forward at this New York conference, whose purpose was to envision a better future for Haiti after January’s devastating earthquake, do not reflect Clinton’s remorse. In fact, they call for more of the same failed policies for which he was apologizing.

The same so-called international development community that Clinton represents, such as the UN Food Program and USAID, have already played a significant role in Haiti’s modern history, one that deliberately reconfigured the country to fit it into the new global division of labor. The majority of the Haitian population has been transformed from relatively productive and self-sufficient farmers, to low-cost workers for assembly plants – which is hailed as Haiti’s new “competitive advantage”.

Old “experts” back in the country

Clinton has invited these same “experts” back to Haiti to lead reconstruction efforts, including in the agricultural sector. Instead of being a vehicle for transformation that would bring infrastructure, jobs, health, resettlement, and food security to the country, they are peddling the same policies that have only brought starvation to Haitian farmers. Apologies mean nothing when the story of rice in Haiti continues to be one of neglect.

Up until the 1980s Haiti was able to feed itself, growing enough rice, beans, corn, sweet potatoes, and cassava. However in early 1986 Haiti began to liberalize its economy by lowering tariffs, cutting social spending, and privatizing its state-owned enterprises.

“. . . The IMF and World Bank . . . decreed that we apply structural adjustment programs,” said Camille Chalmers – an economist with the Haitian Platform to Advocate for Alternative Development, “ . . . They told us that we’re right next to the biggest agricultural producer in the world, so there’s no reason to produce our own food because we can buy it at a cheap price, and that the peasants should go to the city to sell their labor to American assembly plants to make textiles and electronics for export.”

The brutal impacts of this neoliberal restructuring on Haiti’s poor have led detractors to call it the “Plan of Death”. It started with Ronald Reagan’s Caribbean Basin Initiative, and then was accelerated under successive governments in both the United States and Haiti, with a great deal of help from the International Monetary Fund and World Bank. The Clinton administration’s agricultural policy towards Haiti fell right in line with this same logic.

A year after the first coup that ousted Jean Bertrand Aristide in 1991, Erly Industries and its newly formed subsidiary, the Rice Corporation of Haiti, signed a nine-year contract with Prime Minister Marc Bazin’s disputed government. This contract flooded Haiti with highly subsidized rice from the United States, known as “Miami Rice.” In 1980 Haiti imported 16,000 metric tons of rice, and in 2009 the nation imported 340,000 tons – a 21-fold increase in 30 years. By the time of the earthquake Haiti was importing 51% of its foodstuffs and 80% of its rice. This was only natural according to Bill Reed of the Arkansas-based Riceland exporters as “Haiti doesn’t have the land nor the climate . . . to produce enough rice. The productivity of U.S. farmers helps feed countries which cannot feed themselves.”

The frequent “food riots” that dominated global headlines about Haiti prior to the earthquake happened because the slums of Port-au-Prince (where 85% of the city’s residents reside) were home to the many once-productive farmers who were driven out of their plots and were now dependent on handouts from international organizations and subject to the violent fluctuations of the market.

After the earthquake, Haitian Prime Minister Réne Préval — a former agronomist from the fertile Artibonite Valley — openly criticized the U.S. policy of food aid, which took the place of buying from local producers as an effort to jumpstart the devastated rural economy.

Since Préval’s sharp criticism in March, his position has changed. The much-criticized cooperation between the Préval government and the interests of large agribusiness is highlighted in a new Emergency Food Production Assistance Program – which will cost an estimated $687 million. This program is based on more of the same recommendations, relying on expensive imported technologies and export-oriented production. Mervyn Claxton, an expert on the Caribbean political economy, is highly critical of the initiative, stating that despite the presence of a Haitian role on paper, the document has clearly been prepared by “American and/or World Bank/UN systems ‘experts.’’ Claxton points out that the omission of food security, the failure to prioritize agriculture, and the lack of involvement of popular community organizations in favor of a focus on private-sector solutions constitutes evidence of the document’s authorship.

Ignored by the development community are the many innovative and practical ideas being put forward by Haitian popular organizations, progressive non-governmental organizations, activists, and other commentators in the Caribbean. One such practical proposal put forward by the Center for Economic and Policy Research encourages international donors to commit to the purchase of Haiti’s entire rice crop over the next two years. Their study reports that this would nearly equal the amount of food aid that the international community would otherwise provide, in addition to providing struggling Haitian farmers with income, incentive, and an opportunity to produce rice.

Another option, according to Haitian activist Jean St. Vil, is the introduction of a school-feeding program which is based on local agricultural production. By supporting local agriculture, it would spur the reinvestment in rural infrastructure which is crucial to developing a healthy agricultural sector. St. Vil goes on to state that rural infrastructure is so neglected that “a 16 KM stretch of road between St-Etienne (on the way to Jacmel) and the coastal city of Bainet, takes one more than 3.5 hours to travel. Meanwhile, all along the road to Jacmel you can see peasants trying to sell their products.”

Clinton remarked: “Every time we spend a dollar in Haiti from now on we have to ask ourselves, ‘Does this have a long-term return? Are we helping them become more self-sufficient?'” Nearly four months after the devastation of the earthquake the answer is a clear and resounding no.

Mexico has a vast army of informal workers who receive little in the way of formal state benefits. Covid lockdowns have hit them hard and only neighbourhood cooperation is helping them survive.
Read more
Book and Film Reviews

The emerging Colombian cannabis market has a predicted value of $54 billion USD by 2025. Its potential to uphold the peace agreement, create jobs for rural farmers and boost the national economy is remarkable, although there are stubborn obstructions to progress.
Read more
Environment

Scarred by a brutal massacre which took place in December of 1997 and left 45 dead, the residents of Acteal, in the highlands of Chiapas, continue to remind the world never to forget. One woman is at the forefront.
Read more
Agriculture & Agribusiness

Just when Argentina’s economy seemed to be at its darkest hour, Chinese president Xi Jinping proposed a multi-billion investment in the domestic pork meat industry. What originally seemed like a great opportunity has morphed into the source of a deep societal division.
Read more
Haiti

Haiti is not unfamiliar with violent uprisings. However, since the US-backed installation of Jovenel Moïse in 2004, unrest has been relentless, with violence and repression reaching a bloody crescendo in recent weeks.
Read more
Agriculture & Agribusiness

Slavery was abolished in Martinique in 1848. But today the islanders are victims of a toxic pesticide called chlordecone, that’s poisoned the soil and water and been linked by scientists to unusually high rates of prostate cancer.
Read more