Latin America BureauNews, analysis and information on Latin America, its people, politics and society.
HomeCountriesArgentinaARGENTINA: A TEMPLATE FOR DISASTER

ARGENTINA: A TEMPLATE FOR DISASTER

”In the rice fields of Corrientes province, in the scorched hills of Córdoba and the displacement of rural communities in Santiago del Estero and Formosa; in the floods of Salta and the children born with physical deformities in Chaco and Misiones; in the uniformly green carpets of

Spraying soya plantation with glyphosate what were once the most productive fields of Buenos Aires and Santa Fé, we see the footprint of an agribusiness model that leaves in its wake illness, death and fields laid to waste. More than 350 million litres of agrochemicals are used annually on the soya bean harvest alone. They pollute the environment, are breathed in, absorbed or simply ingested through food….” 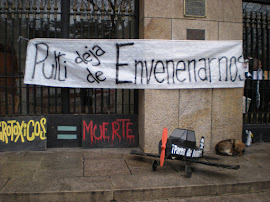 Banner reads ‘stop poisoning us’. Credit: Paren de FumigarnosThis horrifying description of the devastation being inflicted on Argentina’s formerly diverse and thriving agriculture appears in a recent statement by a local group, Paren de Fumigarnos (Stop Spraying Us!), which is waging a campaign against the spraying of agrochemical herbicides and pesticides in the province of Santa Fe. According to the government’s new Strategic Agrofood Plan, the area under arable cultivation in Argentina will increase by just over a fifth by the end of this decade, even though campaigners point out that the agricultural provinces are reaching their limits, with very little new land available for cultivation. The government expects most of the new land to be cultivated with soya and maize. The only way this goal can be achieved is by destroying more forests and taking over more land once used to cultivate food crops.

The new Strategic Agrofood Plan aims to increase the area of arable land from its current 34 million hectares to 42 million by 2020. According to the Grupo de Reflexión Rural Argentina, one of the country’s leading environmental groups, 20 million hectares are already given over to soya

Clearing the land for soya Credit: Greenpeace production, yet further big increases are planned, in order to boost production from 52 million to 71 million tons. The PEA’s objective is to boost economic output from the rural sector by US$100bn, thus tripling Argentina’s export sales. The Grupo de Reflexión Rural concludes: ‘the announced extension of agricultural land dedicated to soya production, and in particular for bio-fuel, will inevitably advance into fertile regions now used to feed the local population, thus threatening far more than now Argentina’s ability to feed its own population.’

In an analysis of the PEA in the Spanish review Sinpermiso, the Argentine scientist Guillermo Almeyra is even more explicit in his criticism of the government’s plan. ‘The new lands would be at the expense of fragile regions such as the Chaco and Formosa, Santiago del Estero or Jujuy, and the expulsion of peasant families, as well as deforestation and all the environmental disasters (floods, landslides, soil exhaustion) that will come from this extension of the agricultural frontier…The production of vegetables and fruit that are vital for a healthy diet will be left behind as a result of the promotion of the soya model of production and exports which leaves the earning of the foreign currency necessary for the country’s development in the hands of ‘seed pools’ such as Grobocopatel or transnational oligopolies.’

Once renowned for its beef exports, Argentina is now the world’s leading exporter of biodiesel, soya oil and soya meal, as well as being the third largest exporter of soya beans. The Fernández government is dedicated to the further development of GM crops and, according to the Taking soya to the port Credit: MercopressStrategic Agrofood Plan, plans to increase its exports of GM seeds by 400% by 2020. The government has also embarked on an aggressive programme for the development of transgenic animals. In her speech announcing the launch of the PEA, the president praised plant and animal cloning, boasting that she herself had used computer software to clone a cow. The country now has two transgenic cows (reportedly producing milk) and one transgenic bull. In 2010 the Ministry of Agriculture, Livestock and Fisheries received 277 applications for authorisation to carry out experiments with ”vegetable organisms”. Twenty biotech projects for crops have been approved: 14 for maize, three for soya bean and three for cotton.

While agribusiness is imposing monoculture on Argentina’s arable land, in the southern province of Río Negro, where irrigation in the late 19th century turned a desert into fruitful orchards, the Chinese are grabbing large tracts of land for soya production, while Saudi Arabian and Qatari interests are doing likewise in the northern provinces of Chaco and Formosa. Deforestation is increasing, along with the displacement of rural and indigenous communities.

In an on-line article about the depopulation of the countryside, the Grupo de Reflexión Rural points out that, ‘The depopulation of the countryside, an agriculture system with no farmers and the suppression of rural life continues unabated.’ And it asks, ‘Shall we be turned into consumers and forced to be dependent on the ups-and-downs of the global markets? Must we resign ourselves to what companies and markets decide to produce from the land on which we once grew our own vegetables and grazed our animals?’

In another development, scientists from two Argentine government research centres – the National Scientific and Technical Research Council (Conicet) and National University of the Littoral (UNL) – have developed a new type of GM soya that, as well as being resistant to glyphosate (the herbicide in Roundup), has also had a gene added to it from the sunflower to make it more resistant to drought and saline conditions. The initiative, which has the full backing of the government, has been funded by Bioceres, an Argentine company backed by over 200 large soya producers, and Arcadia Bioscience, a US company. It is Argentina’s attempt to compete in the seed market against Monsanto and the other big biotech companies.

The announcement of the new soya was made in February, when Argentina was going through a serious drought, which had led to a 20%-40% decline in the soya harvest. If it lives up to the promises made by the manufacturers, the new variety – which is to be calledVerdeca and will come on sale in 2015 – will be warmly welcomed by big producers. But it has greatly alarmed environmentalists, who fear that it will make soya farming viable in new, vulnerable ecosystems. Hernán Giardini, coordinator of the Greenpeace forests campaign, told the environmental magazine, Ecoamericas: “If deforestation is not prohibited in absolute terms, this new transgenic seed will spell the end of the last native forests in the Chaco region, because it will allow soya cultivation in [currently] wooded areas with low rainfall and saline soils, and it would also bring about the arrival of soya in new regions, such as Patagonia.”

Argentina’s economy may be booming for now, but the government’s template for prosperity comes at a disastrously high environmental and social cost and one that may prove even more damaging in the future.

Diana Mills is an Argentine-born freelance journalist, novelist and campaigner on environmental, social justice and ethical investment issues. She is a member of the Latin American Mining Monitoring Programme (LAMMP), the National Justice and Peace Network, and the Ecumenical Council on Corporate Responsibility.
Like this post? Take a second to support LAB on Patreon

Pacts of silence and patriarchal family structures in Argentina

Brazil: deforestation financed from US & Argentina