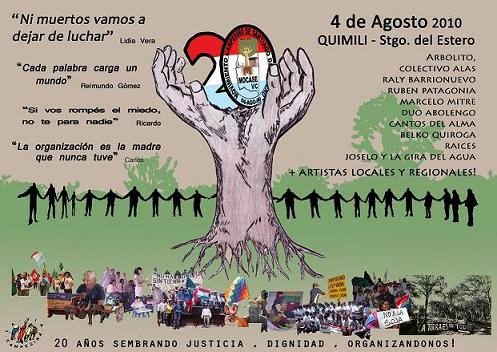 The death in mid-November of Cristian Ferreyra, a member of a peasant farmer organization in the north of Argentina has focussed attention on a struggle between small farmers and their families and large landowners anxious to clear their land to plant profitable soy-bean crops for export.

Ferreyra, aged 23, was shot and killed at home in San Antonio, in the province of Santiago del Estero. Another man was seriously wounded in the incident.

Two men alleged to have been hired by a local landowner have been arrested for the shooting, which came after repeated threats against the Santiago del Estero Peasant Movement (MOCASE). His death led to large protest marches in the capital of the province and in Buenos Aires.

‘They come in a car with papers for us to sign,’ says Gloria, a MOCASE member. ‘They say they’re the legal owners of the land. But we own it, we live on it, and we farm it.’

And, says Gloria, the pressure does not stop there. ‘If we don’t sign, the paramilitaries and the police come. They threaten to kill us.’

MOCASE has been campaigning for more than 20 years against the expropriation of land in the dry region of the north of Argentina, and for small-scale farming to be promoted rather than large scale properties usually planted with soya grown for export.

‘Many families live in the wooded areas remaining in Santiago del Estero, and they help sustain peasant farming communities. So to authorise clearing of the woods implies, in practice, the eviction of the peasants. It is to be regretted that the provincial government encourages deforestation and the violation of the rights of rural inhabitants,’ said Hernán Giardini, head of Greenpeace Argentina.

According to Greenpeace, some 70% of native forests in Argentina have been lost in recent years, as the frontier of land for intensive agriculture has rapidly advanced through the central and northern provinces.

Santiago del Estero, together with neighbouring Salta and Chaco, have lost the greatest amount of forests, which according to data from the Department of National Environmental and Sustainable Development were cleared at the rate of 280,000 hectares per year between 1998 and 2006.

In recent months, Santiago del Estero landowners have stepped up attempts to evict families from land they have farmed for years. The businessmen claim to have legal titles to the properties, and have often hired former policemen and other security staff to remove the peasant farmers.

More than a hundred of these producers have formed the group Santiago Justo y Productivo; according to Argentine press reports, the group claims the violence began with members of MOCASE, who they say destroyed machinery, tore down barbed wire, and attacked their workers.

MOCASE, which is supported by some 8,000 peasant families in the province, has organised resistance to these land grabs and the clearing of forests in the north of the province. MOCASE claims that the big landowners acquired the titles to the land during the last military dictatorship (1976-1983) but that peasant farmers have been farming them for subsistence in the years since then.

Ferreyra was one of those who guarded the land claimed by the peasant farmers, and had been a member of MOCASE for several years.

The provincial governor Gerardo Zamora, of the governing Kirchnerist tendency within Peronism, has set up a ‘mesa de diálogos’  to try to get both sides to sit down and discuss the problem. So far, without much success.

Argentina’s soya production has grown enormously in the past twenty years, increasing by more than 200% since 1995. According to a report by the Worldwatch Institute, a US-based environmental NGO, more than 98% of that production is of GM soya.

MOCASE, however, insists on ‘food sovereignty’. It says that priority should be given to making Argentina and its population self-sufficient in food rather than growing crops for export. The local farmers grow cotton and maize, as well as keeping herds of goats and cattle to produce meat, milk and cheeses.

Among other demands, the participants called for an end to land evictions, and stressed that food sustainability should be the government’s priority. ‘Food should not be treated as a commodity. The land is there to feed the people,’ said Cristina Loaiza, a member of MOCASE who attended the Congress.

In a statement, the National Indigenous Peasant Movement (MNCI) declared: ‘this violence comes from the agro-business model. The dead, the wounded, the evictions are all from the peasant communities. The State creates the conditions enabling the power of money to impose its logic of destruction and death.’

‘These models of production are being questioned, and as Argentine men and women we need to understand that on the one side is life, on the other death. One side signifies work and dignity, the other profits for the few. One side means national food sovereignty, the other, domination by transnational companies.’