Latin America BureauNews, analysis and information on Latin America, its people, politics and society.
HomeCountriesBoliviaBrazil: looking at the bigger picture

Brazil: looking at the bigger picture

Letter to the Guardian 2 October 2011 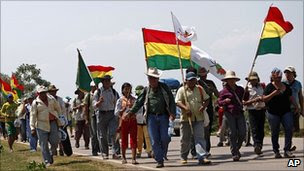 Your moving report from Marabá (Death in the forest, 29 September) needs to be read with your story the previous day (Bolivia halts Amazon road project after violent protests, 28 September) to appreciate the big picture of Brazil’s influence in the Amazon.

The controversial road through the Sécure natural park and indigenous reserve in Bolivia is, as your report says, only one of many infrastructure projects promoted by Brazil in South America, including the “inter-oceanic highways” cutting through the Amazon from Brazil to the Pacific coast via Peru and Bolivia. The main purpose of the highways is to provide a faster route for Brazilian soya and beef to Asian markets, just as the Cachuela Esperanza dam proposed for northern Bolivia is designed mainly to filter out sediment to improve the performance of Brazil’s downstream hydroelectric plants, at a heavy cost to local Bolivian farmers.

While Brazil has every right to promote economic development within and beyond its borders, this model needs more questioning. Do such projects benefit all Brazilians, or an elite? Who do they benefit in neighbouring countries such as Bolivia and Peru? The story of Marabá illustrates the violence that such projects generate, and the fact that the victims are vulnerable communities and environmental activists. Finally, in a context of climate change, is this development sustainable?

Former Brazilian president Lula da Silva was an important protector of Bolivia’s Evo Morales, and if it is true that President Ollanta Humala in Peru owes his recent narrow victory to Brazilian support, questions about the export of the “Brazilian model” to the rest of the region become all the more urgent.