Can Mexico Build a Democracy from Above? Below? Both?

Andrés Manuel López Obrador (AMLO), the presidential candidate of a coalition of three left-of-center parties (and multiple factions within the parties), recently told the press that he had contacted social activists Javier Sicilia and Julián LeBaron, both in the leadership of the Movement for Peace with Justice and Dignity, offering his support if they were to seek public office in Mexico’s general elections this summer. 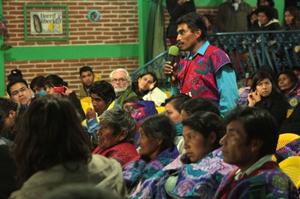 Seminar in San Cristobal DesinformemosRevolution (PRD) lacks the vital energy that grassroots social struggle can bring to his campaign. Indeed, the virtue of electoral participation has become one of the main themes of his campaign, though in this case, both Sicilia and LeBaron rejected the offer.

With an eye on Mexico’s presidency, AMLO is reaching out to civil society—not seeking a common stance on all social issues, much less any form of explicit alliance, but to pull prominent social activists into the arena of electoral politics. The electoral arena, he argues, is where real social change can take place.

Two weeks ago this blog commented on the breach between Mexico’s progressive social movements and the leftist parties that seek power within the state. Both the grassroots movements (from below) and the leftist parties (from above) call for a democratization of Mexico’s social relations and the creation of a pact between the state and the citizenry that acknowledges a set of reciprocal obligations, with an emphasis on the rights of the very poorest and most victimized of Mexico’s citizens.

There is no necessary contradiction here. The strong “social left” that emerged from the civic movements of the mid 1980s played a major role in the construction of the PRD itself. That social left still exists, but while a part of it retains its autonomy, another part has been built around the presidential campaign of López Obrador.

Parallel to the trajectory of the electoral coalition, AMLO’s supporters have put together an active civic organization called the National Regeneration Movement (Morena), which has the explicit goal of electing AMLO to the presidency. Some critics have argued that the creation of Morena, a civic organization with openly electoral goals, clouds the civic-electoral relationship.

This week, AMLO campaigned in the heavily indigenous areas of southeastern Mexico, promising to improve the situation of long-marginalized indigenous groups if elected. “We intend to honor the San Andrés Accords,” he told public assemblies in Tzotzil and Tzeltal Maya villages. “We must return a little of the great deal the indigenous groups have given to the nation.” Vote for us, that is, and we will help you.

AMLO brought his campaign to Chiapas just a week after the close of an “international seminar” called “Planet Earth: Anti-Systemic Movements,” held two weeks ago in the Chiapas city of San Cristóbal de las Casas. The contrast between the seminar and the PRD campaign highlighted some of the divisions between the Zapatista-inspired movements that have emerged from Mexico’s civil society and the country’s electoral left. The seminar was convened to discuss the influence of the 1994 Zapatista uprising on grassroots movements—particularly indigenous movements—in Mexico, and on popular uprisings around the world.

The Zapatista movement, by constructing on-the-ground alternative institutions of governance and cooperation, in addition to confronting and demanding new rights from the state, has given “new content and new possibilities not only to the nation but to the entire world,” commented Javier Sicilia at the event. A Purépecha visitor to the seminar from Cherán, Michoacán, remarked that, “although the words ‘dignity,’ ‘liberty,’ and ‘justice’ already existed, it was the Zapatista brothers and sisters who in 1994 taught us to use them in each one of our struggles.” Such can be the power of militant, coherent movements from below.

In a context in which political parties—left, right, and center—are perceived as seeking nothing more than their own power, privileges, and offices within the political arena, it is tempting to write them off and look elsewhere for vehicles of “dignity, justice, and liberty.” Nonetheless, recent experience in Mexico, especially the ongoing repression launched against social movements, suggests that it does indeed matter who holds power within the state.

The state can be more or less responsive to demands for progressive social transformation. Perhaps those who value peace with justice and dignity had best keep a foot in each camp.