Latin America BureauNews, analysis and information on Latin America, its people, politics and society.
HomeTopicsMiningMining: ISDS - a licence to plunder 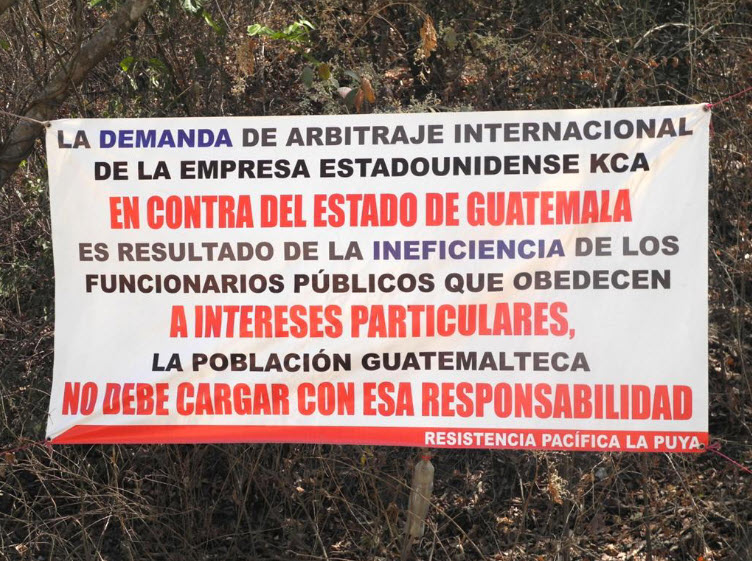 In his famous work The Open Veins of Latin America, the Uruguayan writer Eduardo Galeano described how foreign powers plundered the region’s mineral wealth. For centuries, the Spanish and Portuguese crowns, and later, foreign mining companies, extracted vast riches from the Latin American subsoil and then transported these raw materials to where they could be sold for profit.

But writing 50 years ago, Galeano could not have foreseen that mining companies and their associates would come to extract wealth from Latin America with far less effort – thanks to a system known as Investor State Dispute Settlement, or ISDS.

By the 1990s, most of Latin America was entangled in this system, which allows investors to sue national states when they believe public decisions may have had a negative impact on their potential profits. Latin American states have been hit by hundreds of claims already, paying out billions of dollars, while there are outstanding claims to the tune of billions more.

Mining investors have been heavily involved in these cases, making at least 35 claims since 1997, with a surge of 16 between 2014 and 2018. In total, mining companies have sought to extract at least $40 billion from Latin America. Of these cases, 19 have been settled, eight of which were in favour of investors, who have been awarded over $3 billion, most of it from Venezuela.

The sums involved can be eye watering. In 2018, rich individuals linked to a UK firm sued Galeano’s home country Uruguay for $3.5 billion over cancellation of an iron ore project – a claim worth nearly 6 per cent of the country’s GDP in 2019. The case was thrown out, however, with the tribunal finding that the claimants were not the owners of the investment.

Bolivia: The town of Potosí has long symbolised the extraction of wealth from Latin America, and this has continued thanks to ISDS. A silver-indium-gallium project proposed by TriMetals Mining threatened the local ecosystem and drinking water, resulting in conflict with local people.

When violence escalated, the state nationalised the mine, resulting in an ISDS claim for $385.7m and an award for $27.7m. TriMetals was able to sue because a Canadian investor claimed through its Bermudan subsidiary, meaning the conditions of the now defunct UK-Bolivia investment treaty were applied. TriMetals also received help from an anonymous third-party funder.

Ecuador: a recent consulta popular – a kind of local referendum – has again shown the strength of community opposition to mining. More than 80 per cent of those who voted on whether to permit mining in the watershed of Cuenca’s five rivers chose to reject mining, concerned with how the industry would affect the delicate páramo [Andean high-altitude wetland]ecosystem on which they depend for water.

While this was a historic triumph, and the product of nearly two decades of struggle, ISDS continues to cast a shadow. The Canadian company INV Metals, whose Loma Larga gold project is likely to be affected by the consulta popular, may resort to an ISDS if indeed it is unable to mine. In 2019, with the context becoming increasingly difficult for the company, it said it was considering ‘further legal actions’.

Likewise, the Chinese consortium EcuaGoldmining has initiated ISDS proceedings over its Rio Blanco project, also located in the Cuenca region, which the courts suspended in 2018 due to the company’s failure to consult local communities.

In July 2018, a group led by the lawyer Pablo Fajardo tried to deliver a letter to the Chinese Embassy in Quito signed by 132 international organizations, including 43 winners of the Goldman Prize. The letter accused Ecuagoldmining of involvement in ‘kidnapping, arbitrary detention and attempted murder of indigenous leaders.’ Embassy staff refused to receive the group.

As with many ISDS claims, EcuaGoldmining may sue not only for actual losses, but also for projected lost income, in this case from an 11-year concession that might have yielded over $450m. Ecuador has terminated many of its investment agreements, including one with China, but work at Rio Blanco started just before its expiry.

The story of Ecuador’s only settled mining claim shows just how unfair these cases may be. In 2008, Ecuador terminated two concessions in the Intag Valley belonging to Canadian company Copper Mesa Mining. Despite having failed to conduct either a proper environmental impact assessment or adequate local consultation, Copper Mesa sued Ecuador for $69.7m.

While arbitrators acknowledged that the company ‘recruited and used armed men…as part of a well-funded plan’, they still awarded Copper Mesa $19.4m plus interest. They also declared that Ecuador should have ‘attempted something to assist’ the company with consultation.

Colombia: neighbouring Colombia has faced an onslaught of mining claims since 2016, mostly from Canadian companies. These total over $18bn, around 5 per cent of national GDP in 2019, with several of the claims concerning Constitutional Court decisions protecting water supplies and indigenous lands.

By far the largest claim is from Cosigo Resources, for a staggering $16.5bn. This resulted from the creation of a nature reserve to protect Amazon rainforest, following conflict with indigenous people. Despite the huge sum claimed, the company did little exploratory work at its Taraira South gold mining concession. This case provides a good example of companies using ISDS as a means of bullying states, with Cosigo offering to withdraw its claim if the park will stop hindering its project.

Greystar/Eco Oro Minerals is seeking $764m arbitration through the World Bank’s dispute facility over its Angostura gold and silver project located in the Santurbán Páramo. This follows the Colombian Constitutional Court’s decision to restrict mining in the páramos in 2016.

There is also an obvious conflict of interest in this case, given that the International Finance Corporation – the private lending arm of the World Bank – contributed funding to the project, claiming it would ‘generate significant benefits and promote sustainable development’ in the region.

The claim is supported by Tenor Capital, in an example of third-party financing of these cases. In another ISDS dispute, unrelated to mining, this Wall St hedge fund met a claimant’s legal costs of $62m in return for 70 per cent of the award, which ended up at $1.4bn.

In other words, while proponents of ISDS argue it encourages investment in developing countries, third-party financing of these cases has rendered it little more than a form of high stakes gambling. ISDS claims can even be treated as derivatives to be marketized.

Another $700m is claimed by Gran Colombia Gold for alleged state failure to address  disruptions to its operations caused by opposition from small-scale miners, indigenous and Afro-Colombian people, and guerrillas in the districts of Segovia and Marmato.

Arbitrators rejected Colombia’s assertion that the company could not claim jurisdiction because it was not owned by Canadians and did not have substantial commercial activities in Canada.

Guatemala: finally, Guatemala received its first claim in 2018, when the American company Kappes Cassidy sued for $350m over its El Tambor goldmine, which was suspended by the Constitutional Court in 2016.

The project has been subject to longstanding opposition concerning water and health issues, including a two-year blockade that was violently removed in 2014. Four senior members of the local subsidiary are subject to arrest warrants and criminal investigation in Guatemala.

When the mining stops

Many of these disputes are the result of mining projects stopped or suspended to protect the environment, or due to concerns over indigenous and community rights. Most go back many years; often they have a history of violence. Many claims are from US or Canadian investors or their subsidiaries.

The Southern Cone has been largely unaffected. Argentina and Chile have received no mining claims (though Argentina has been hit with many claims from other sectors), while  Brazil has never signed an agreement that includes ISDS provisions, thus avoiding this limitation on its right to regulate.

The trends of seeking extortionate sums for possible future losses and the third-party funding of ISDS cases have both encouraged more claims. Where claims are ongoing, some investors have tried to use to the ISDS process to further pressure states, as in the Cosigo vs Colombia case.

The ISDS system has received widespread criticism and the UK post-Brexit could take a different course. It has signed a trade agreement with Canada, which allows for ISDS, but these clauses are currently suspended pending review. While Bolivia and Ecuador have now largely disengaged from the ISDS system, this takes time.

The recent surge of mining claims may be declining, with just five new claims in 2019-20, and one new reported threat in 2020. But this still leaves current mining claims worth at least $24bn awaiting arbitration, and more are threatened. With past rulings having typically awarded around 20 per cent of the sum claimed, another $5bn could be extracted from Latin America during this latest phase of plunder.

Main image: Banner reads ‘KCA’s suit against Guatemala is the result of the inefficiency of public officials who obey individualinterests; the Guatemalan people shouldn’t bear this responsibility’; Credit: Jen Moore/IPS

A good source about LA mining and ISDS is this 2019 report, well named ‘Extraction Casino’

Case details can be checked at UNCTAD’s database –

Another useful resource is ISDS Platform

GDP figures for 2019 are from the World Bank.