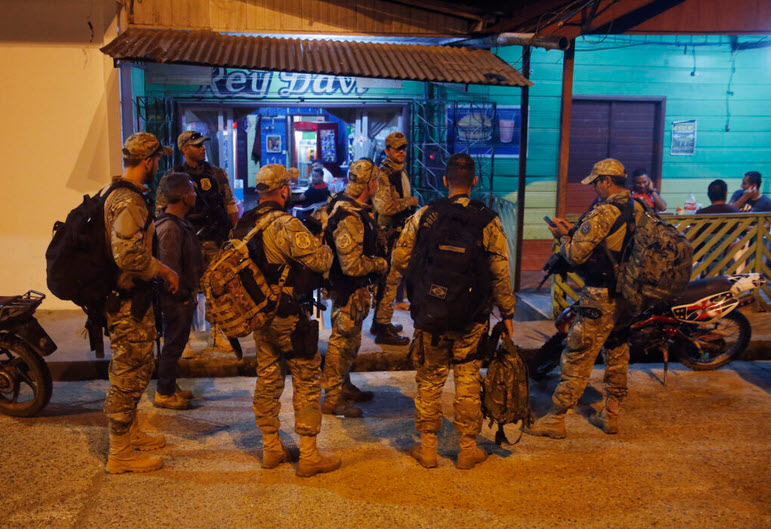 This article was originally published on 28 May 2019 by Amazônia Latitude to describe the social problems around Tabatinga, on the border between Brazil, Colombia and Peru. It was updated on 9 June 2022 to record the disappearance in the area of British journalist Dom Phillips and indigenous expert Bruno Pereira. You can read the original (in Portuguese) here. Chris Whitehouse translated it for LAB.

Brazil ranks third among countries with the longest international borders. It has a border totalling 16,885 km with all the countries in South America except for Chile and Ecuador. The vastness of this border territory has made it difficult for public policies to address its many problems. Among the most notorious issues are drug trafficking, smuggling of goods, weapons and cars, high rates of violence and a lack of social development.

However, these problems are not present along all Brazil’s borders. Every stretch has specific situations and different socio-environmental conflicts. The triple border with Colombia and Peru, in the state of Amazonas, is characterized by poor access to basic services, the presence of organized crime, human trafficking, migratory waves, criminal gangs, timber extraction and illegal mining. This is facilitated by the unusual geography of the region, which has many rivers and extensive areas of forest that make it difficult to monitor and protect national borders.

Images by Amazônia Latitude photographer Edmar Barros showing the region where British journalist Dom Phillips and Brazilian indigenous expert Bruno Pereira disappeared on 5 June 2022. Images show the river and some of the search activity by police, local people and others.

Triple border in the Arco Norte
The city of Tabatinga makes an interesting case study for understanding the situation on Brazil’s borders. Located in the micro-region of Alto Solimões in the interior of the state of Amazonas, Tabatinga forms a conurbation with the Colombian city of Letícia. Linked by the Avenida da Amizade, the cities form one settlement, with overlapping legal jurisdictions. It requires the creation of specific regulations for both cities, which, unfortunately, are not capable of meeting the real needs of their populations.

Data from the Brazilian Institute of Geography and Statistics (IBGE) shows that only 2,700 of Tabatinga’s 64,000 residents (4.8 per cent of the population) have employment documents, while 48.2 per cent of them survive on half the minimum wage or less per month. Only 21.6 per cent of homes in the municipality have adequate sanitation, only 8 per cent of the roads are properly paved, and the infant mortality rate is 20.88 deaths per thousand live births, much higher than the national average of 12.8.

The unusual situation on the border combined with the absence of the Brazilian, Colombian and Peruvian states and Amazonian geography, facilitates the movement of drugs, weapons and other illegal products, by organized crime in Brazilian territory.

Drug trafficking in the south of the country is controlled by the Primeiro Comando da Capital (PCC), the main Brazilian criminal gang, but is dominated by its rival, the Família do Norte (FDN) in the north. The FDN was directly involved in the massacres of PCC members in Brazilian prisons in recent years.

Rivalry between the Brazilian drug traffickers is expressed in the struggle for domination of the illegal weapons market and the sale of drugs in national and international territory, as well as in their alliances with Colombian, Peruvian and Bolivian criminal organizations. Partnerships with the latter are responsible for fuelling the illegal Brazilian market and the proceeds fund guerrilla groups, for example, the FARC in Colombia. This panorama accounts to a great extent for the alarming number of violent deaths in Brazil every year – 60,000.

In addition to the ‘wild-west’ created by the drug traffickers, we should highlight the situation of the indigenous people who live in the region. The socio-environmental conflicts generated by the unusual geography and state negligence force them to migrate to small urban settlements in search of health care, food and other goods. According to the Estado de São Paulo (Favela Amazônia – Estadão (estadao.com.br), many of these immigrants are unable to return to their villages because they cannot afford the trip home.

This is due to the lack of access to the city, which is via a small airport and rivers. There are no roads linking the municipality to Manaus, the capital of Amazonas.

A particularly worrying case is that of the Ticuna people, many of whom live in the Alto Solimões region. The living conditions of the Ticuna have deteriorated in the absence of the state, as described in an article in the Estado de São Paulo, entitled Favela Amazônia.

According to the article, the proximity of their villages to Tabatinga has led to the development of indigenous neighbourhoods with serious social problems on the outskirts of the city. In the absence of job opportunities and basic welfare, many have to eke out a living from the city’s waste tips, competing for their food with other vulnerable sectors of the population and vultures.

The state’s lack of interest

The Institute of Research and Applied Statistics (IPEA) recently published its research on the Brazilian border situation. The third volume, entitled Fronteiras do Brasil: uma avaliação do Arco Norte, concluded that the presence of a socially and culturally diversified population that has sustainable land and forest management practices must be taken into account by public policies on the Amazon borders, and that development strategies adopted in other parts of the country are not appropriate or as effective in this environment.

However, the authors also cited problems such as the precarious urban structure; the absence of efficient transport routes and integration with commercial centres; the poor communication between security forces, and the corresponding lack of integrated strategies and information sharing that would help to maintain the security and national sovereignty of the countries on the border; the State’s lack of interest in promoting economic and social development in the region, its failure to make the most of local biodiversity and preference to simply administer and occupy the area; the precariousness of health resulting from poor health care, a lack of basic sanitation and the presence of open landfill sites; and finally, the situation in Venezuela, which has generated large migratory waves and conflicts on the borders with various countries.

The situation on the Brazilian borders demands greater attention from the country’s government, because it is directly linked to national and international problems, such as drug trafficking, which is in turn directly related to violence and overcrowding in prisons, and the ruining of the lives of people who become dependent on drugs such as crack and cocaine, the latter being the main product crossing the borders in the Arco Norte. This situation highlights the need for academics, government and social leaders, as well as civil society, to debate and solve these problems.

Located along the Amazon Brazil-Peru border is the Vale do Javari Indigenous Reserve, the second largest in the country, with 85,000 square kilometres – almost as large as Portugal. Javari’s tropical abundance [CW1]  has made it an access point for illegal hunters, fishers and loggers, provoking violent conflicts between the indigenous inhabitants and the riverside communities that opposed the creation of the reserve in 2001. It is also a smuggling route for cocaine traffickers that take advantage of the absence of the State and battle to control the trade between Brazil, Peru and Colombia.

This was the area in which the British journalist Dom Phillips and the defender of indigenous rights, Bruno Araújo Pereira disappeared on Sunday. They travelled along the Itaquaí River, the main waterway to access the Vale do Javari. They were seen for the last time when they arrived at the community of São Rafael on Sunday 5 June. They talked with the wife of a community leader called ‘Churrasco’ there, then departed for Atalaia do Norte, a trip that lasts approximately two hours, but never reached their destination.

‘The two men were aiming to visit the Indigenous Surveillance team that is close to the town called Lago do Jaburu (next to the FUNAI Surveillance Base on the Ituí River), so that the journalist could interview indigenous people’, says the press release issued by Univaja, on Monday 6 June.

They travelled in a new boat, with a 40 horse-power motor and 70 litres of gasoline, enough for the trip. Univaja began the search on Sunday. On Monday, having failed to locate the men, the indigenous organization contacted the authorities and issued a press release.

A suspect was imprisoned in connection with the disappearance, but the police say there is still no evidence that a crime has been committed. Amazônia Latitude photo-journalist Edmar Barros is in the region accompanying the searches.

In Vale do Javari, along the triple border, coca production increased by almost 20 per cent between 2019 and 2020, to 61,777 hectares in Peru, the second largest producer after Colombia, according to the United Nations. The growing drug trade has increased the dangers and conflicts along the triple border between Brazil, Peru and Colombia, with Colombian and Brazilian cartels disputing control over access to the Amazon River for sending their cocaine to the lucrative European market.

The border region is also home to approximately 6,000 indigenous people belonging to 26 ethnic groups, 19 of whom live in isolation. Since he assumed the presidency, Jair Bolsonaro has made them even more vulnerable. His government makes statements and adopts policies that facilitate extractivist activities that destroy the forest and its peoples and open up space for criminal activity. Groups that defend environmental and indigenous rights have long argued that Bolsonaro’s public position on indigenous territories encouraged the invasion of indigenous lands and conservation areas with impunity.

Meanwhile, the Brazilian Congress is deliberating on legislation that will open up indigenous lands for extractive industries, such as mining and timber. This will put the Vale do Javari, and journalists and defenders of indigenous rights like Dom Phillips and Bruno Araújo, in even greater danger.

Amazônia Latitude is an independent, non-profit project that aims to promote critical debate about the Amazon region and its cultural diversity, natural wealth and dilemmas.